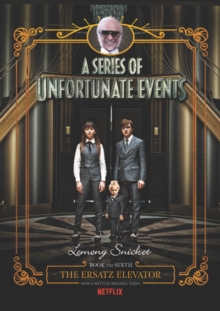 A SERIES OF UNFORTUNATE EVENTS #6: THE ERSATZ ELEVATOR NETFLIX TIE-IN

Product description NOW A NETFLIX ORIGINAL SERIES In their most daring misadventure, the Baudelaire orphans are adopted by very, very rich people, whose penthouse apartment is located mysteriously close to the place where all their misfortune began. Even though their new home in the city is fancy, and the children are clever and charming, I'm sorry to say that still, the unlucky orphans will encounter more disaster and woe. In fact, in this sixth book in A Series of Unfortunate Events, the children will experience a darkened staircase, a red herring, an auction, parsley soda, some friends in a dire situation, a secret passageway, and pinstripe suits. Both literary and irreverent, hilarious and deftly crafted, A Series of Unfortunate Events offers an exquisitely dark comedy in the tradition of Edward Gorey and Roald Dahl. Lemon Snicket's uproariously unhappy books continue to win readers, despite all his warnings. About the Author Lemony Snicket had an unusual education which may or may not explain his ability to evade capture. He is the author of the 13 volumes in A Series of Unfortunate Events, several picture books including The Dark, and the books collectively titled All The Wrong Questions. Brett Helquist's celebrated art has graced books from the charming Bedtime for Bear, which he also wrote, to the New York Timesâ€“bestselling A Series of Unfortunate Events by Lemony Snicket to the glorious picture book adaptation of Charles Dickens's A Christmas Carol. He lives with his family in Brooklyn, New York. Michael Kupperman has done many illustrations for such publications as Fortune, The New Yorker, and The New York Times. He frequently writes scripts for DC Comics. This is his first book.