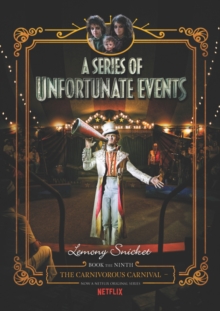 A SERIES OF UNFORTUNATE EVENTS #9: THE CARNIVOROUS CARNIVAL NETFLIX TIE-IN

Product description NOW A NETFLIX ORIGINAL SERIES Everybody loves a carnival! Who can fail to delight in the colourful people, the unworldly spectacle, the fabulous freaks? A carnival is a place for good family funâ€”as long as one has a family, that is. For the Baudelaire orphans, their time at the carnival turns out to be yet another episode in a now unbearable series of unfortunate events. In fact, in this appalling ninth installment in Lemony Snicket's serial, the siblings must confront a terrible lie, a caravan, and Chabo the wolf baby. With millions of readers worldwide, and the Baudelaire's fate turning from unpleasant to unseemly, it is clear that Lemony Snicket has taken nearly all the fun out of children's books. About the Author Lemony Snicket had an unusual education which may or may not explain his ability to evade capture. He is the author of the 13 volumes in A Series of Unfortunate Events, several picture books including The Dark, and the books collectively titled All The Wrong Questions. Brett Helquist's celebrated art has graced books from the charming Bedtime for Bear, which he also wrote, to the New York Timesâ€“bestselling A Series of Unfortunate Events by Lemony Snicket to the glorious picture book adaptation of Charles Dickens's A Christmas Carol. He lives with his family in Brooklyn, New York. Michael Kupperman has done many illustrations for such publications as Fortune, The New Yorker, and The New York Times. He frequently writes scripts for DC Comics. This is his first book.