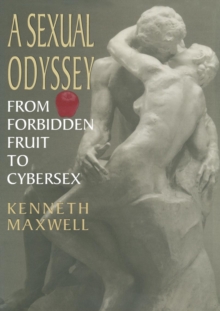 A SEXUAL ODYSSEY: FROM FORBIDDEN FRUIT TO CYBERSEX

Product Description The Brave New World of Sex We've seen in less than a generation a swift revolution in human sexual behavior, attitude, and consequences so dramatic that some people are left in a state of stunned dismay and the public at large in aimless confusion. Much of the trend, if you can call a revoluÂ­ tion a trend, is fueled by, or at least made possible by, technological innovations dating back to the middle of the twentieth century. The birth control pill opened the gate to promiscuity with little fear of pregnancy; marriage became an annoyance; divorce beÂ­ came an opportunity; two working parents became a necessity; and teenage sex became nearly as socially acceptable as holding hands or going to the movies. The copulation explosion resulted in a spiraling epidemic of children giving birth to children, many of them on welfare. Girls seeking relief through abortions were sometimes forced to have their unwanted offspring despite the inevitability of some of them living in poverty and a desperate dead-end environment of squalor and crime. Some misguidedly wanted babies and ended up the same way. To top it all, discipline 2 A Sexual Odyssey became a lost art, leaving schools and neighborhoods infested with gun-toting, knife-wielding teenage delinquents-even in middle-class areas-who engaged in contests fo see who could get the most girls knocked up. The chaotic state of fornication, mating, and birthing may be a throwback to the past. Amazon.com Review This examination of human sexuality is more conventional than the title suggests, but it's an interesting read. Topics include everything from the early history of pornography in Greek and Roman art to a host of predictions about the future of cybersex. The author's vision of things to come includes the decline of AIDS and other sexually transmitted diseases and the advent of portable sex devices for astronauts and business travelers. Other motifs include same-sex sex, aphrodisiacs, mating for money, and nude beaches. From Publishers Weekly Freewheeling yet scholarly, this highly informative and entertaining survey of human sexuality opens with a chapter on nudism (Egyptian Queen Nefertiti and her monotheistic husband, Pharaoh Akhenaton went naked in their palace and gardens with their seven daughters), followed by chapters on gender differences, dating and mating, prostitution, the mystique of masculinity, fertility and childbirth, homosexuality, pornography and erotica, aphrodisiacs, sex toys from ancient Persia to today, population growth and birth control. Maxwell (The Sex Imperative), emeritus professor of biology at California State University, succinctly touches on an enormous range of topics?e.g., infidelity, AIDS, sex after 60, feminist activism, sexual harassment and rape?yet he also offers provocative opinions (early male hominids, he believes, had a subordinate familial role) and includes an in-depth discussion of the ethical issues surrounding new reproductive technologies. A lively compendium crammed with forgotten lore and useful facts. Photographs. Copyright 1996 Reed Business Information, Inc. From the Back Cover This lush, provocative book explores sexuality from our earliest trysts to cybersex and beyond. It indulges in the toys, titillations, and temptations of the most pleasurable of all passions. With spice and flair, Maxwell takes us on a whirlwind tour of human sexuality that is comprehensive in its sweep yet delightful in its alluring and amusing details. Maxwell explores both the time-honored and the bizarre. He capably draws upon the juiciest sexual literature and lore of the past, then casts light on the exciting particulars of modern-day sex, where sex roles (and sex play!) are changing at a frenetic pace. How have the feminist revolution, and the new "Masculine Mystique", changed our concepts of what is sexy or macho? What enticing new images and erotic encounters will the Internet and CD-ROM offer users of the future? How ha