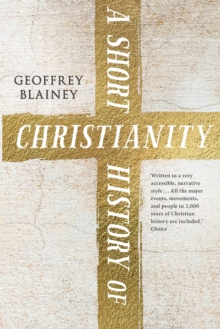 A SHORT HISTORY OF CHRISTIANITY

A vivid, concise and balanced history of the world's largest religion, written for readers of all religious backgrounds. Christianity has played a central role in world history, for better or worse, but beyond the life of Jesus many people know little of this story. Geoffrey Blainey takes the reader on a journey from the very beginnings of Christianity through to the present day. Looking at the development of the religion itself, as well as the social and economic forces that have influenced it, the book focuses on the stories of the key players in Christianity's rise and fall through the ages, as well as how these players shaped the faith of believers.