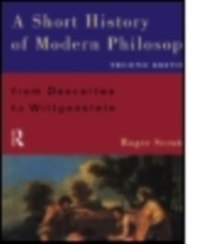 A SHORT HISTORY OF MODERN PHILOSOPHY: FROM DESCARTES TO WITTGENSTEIN

Product Description A Short History of Modern Philosophy is a lucid, challenging and up-to-date survey of the philosophers and philosophies from the founding father of modern philosophy, RenÃ© Descartes, to the most important and famous philosopher of the twentieth century, Ludwig Wittgenstein. Roger Scruton has been widely praised for his success in making the history of modern philosophy cogent and intelligible to anyone wishing to understand this fascinating subject. In this new edition, he has responded to the explosion of interest in the history of philosophy by substantially rewriting the book, taking account of recent debates and scholarship. Review 'Dr Scruton writes with an unusual clarity and fluency, and is always a pleasure to read ... this is certainly a book which you could give to anyone who was curious about philosophy and expect them to learn a lot from it.' - Alan Ryan, Times Educational Supplement ' A Short History of Modern Philosophy could hardly be done much better than Dr Scruton has done it.' - Gordon Graham 'Anyone seeking a short and intelligible introduction to the ideas and intentions of Spinoza, Hume, Kant, Hegel and Marx, among others, need look no further.' - Good Book Guide About the Author Roger Scruton is well known as a writer, broadcaster and journalist. He has written numerous books, including The Meaning of Conservatism, Sexual Desire, and Xanthippic Dialogues.