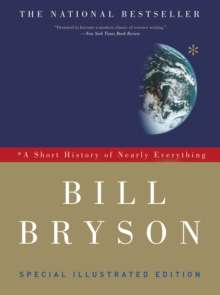 A SHORT HISTORY OF NEARLY EVERYTHING: SPECIAL ILLUSTRATED EDITION

Product Description This new edition of the acclaimed bestseller is lavishly illustrated to convey, in pictures as in words, Bill Brysonâ€™s exciting, informative journey into the world of science. In A Short History of Nearly Everything, the bestselling authorÂ of A Walk in the Woods and The Body,Â confronts his greatest challenge yet: to understandâ€”and, if possible, answerâ€”the oldest, biggest questions we have posed about the universe and ourselves. Taking as his territory everything from the Big Bang to the rise of civilization, Bryson seeks to understand how we got from there being nothing at all to there being us. The result is a sometimes profound, sometimes funny, and always supremely clear and entertaining adventure in the realms of human knowledge, as only Bill Bryson can render it. Now, in this handsome new edition, Bill Brysonâ€™s words are supplemented by full-color artwork that explains in visual terms the concepts and wonder of science, at the same time giving face to the major players in the world of scientific study. Eloquently and entertainingly described, as well as richly illustrated, science has never been more involving or entertaining. Review Praise for A Short History of Nearly Everything â€œA modern classic of science writing. . . . The more I read of A Short History of Nearly Everything, the more I was convinced that Bryson had achieved exactly what heâ€™d set out to do.â€ â€” New York Times Book Review â€œA highly readable mix of historical anecdotes, gee-whiz facts, adept summarization, and gleeful recounts of the eccentricities of great scientists. It moves so fast that itâ€™s science on a toboggan.â€â€” Seattle Times â€œ[Bill Bryson] makes science interesting and funny. . . . You can bet that many questions you have about the universe and the world will be answered here.â€â€” Boston Globe â€œHere are answers to the stupid questions you were afraid to ask in school . . . [Bryson] peppers the book with wit and great details. . . . Bottom line: Science with a smile.â€â€” People â€œIt is one of this bookâ€™s great achievements that Bryson is able to weave a satisfying universal narrative without sparing the reader one whit of scientific ignorance or doubt. . . . [ A Short History of Nearly Everything] represents a wonderful education, and all schools would be better places if it were the core science reader on the curriculum.â€â€”Tim Flannery, Times Literary Supplement About the Author Bill Bryson's bestselling books includeÂ  A Walk in the Woods,Â  The Life and Times of the Thunderbolt Kid, andÂ  A Short History of Nearly EverythingÂ (which won the Aventis Prize in Britain and the Descartes Prize, the European Union's highest literary award). He was chancellor of Durham University, England's third oldest university, from 2005 to 2011, and is an honorary fellow of Britain's Royal Society. Excerpt. Â© Reprinted by permission. All rights reserved. 1 HOW TO BUILD A UNIVERSE NO MATTER HOW hard you try you will never be able to grasp just how tiny, how spatially unassuming, is a proton. It is just way too small. A proton is an infinitesimal part of an atom, which is itself of course an insubstantial thing. Protons are so small that a little dib of ink like the dot on this i can hold something in the region of 500,000,000,000 of them, rather more than the number of seconds contained in half a million years. So protons are exceedingly microscopic, to say the very least. Now imagine if you can (and of course you can't) shrinking one of those protons down to a billionth of its normal size into a space so small that it would make a proton look enormous. Now pack into that tiny, tiny space about an ounce of matter. Excellent. You are ready to start a universe. I'm assuming of course that you wish to build an inflationary universe. If you'd prefer instead to build a more old-fashioned, standard Big Bang universe, you'll need additional materials. In fact, you will need to gather up everything there is--every last mote and particle