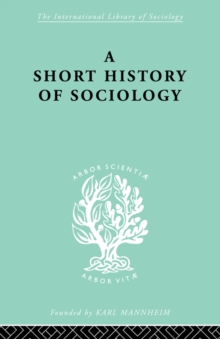 A SHORT HISTORY OF SOCIOLOGY

Originally published in English in 1962, this book presents in clear language an account of the growth of sociology from its earliest roots in the Enlightenment, through the 19th century philosophers in Germany, positivists in France, social workers in England, the theorists in America, through the pioneering days of the early and middle part of the 20th century.