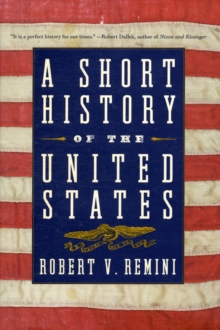 A SHORT HISTORY OF THE UNITED STATES

Product Description A much-needed, concise history of the United States of America by National Book Award winner Robert V. Remini This accessible and lively volume contains the essential facts about the discovery, settlement, growth, and development of the American nation. Beginning with the earliest travelers to landing the Americas, A SHORT HISTORY OF THE UNITED STATES is a kind of highlight reel of U.S. history, including the migration of Native Americans, the founding of a republic under the Constitution, the emergence of the United States as a world power, the outbreak of terrorism here and abroad, all the way through the last years of George W. Bushâ€™s presidencyâ€”the perfect read for those who are searching for an abbreviated version of our nationâ€™s history, what shaped it, changed it, and what may be to come. From Publishers Weekly To write a thorough, balanced history of the United States in under 400 pages is no mean feat. Remini, professor of history emeritus at the University of Illinois at Chicago and a National Book Award winner for his work on Andrew Jackson, deftly wraps his expertise and deep knowledge of his subject in stripped-down prose that provides everything a casual (or bewildered) reader needs to know about the United States from the first English colonists until the beginning of 2008. Remini's final chapters are slightly rushed and his judgments too general to be useful, but these flaws are easily overshadowed by his masterful middle sections focusing on the 19th century (his scholarly specialty). In contrast to some surveys of American history, like Howard Zinn's People's History of the United States or William Bennett's America: The Last Best Hope, Remini delivers an objective narrative of this nation's history that readers of all political stripes will appreciate. 16 pages of b&w illus., 14 maps. (Oct.) Copyright Â© Reed Business Information, a division of Reed Elsevier Inc. All rights reserved. From Booklist The reigning scholarly biographer of Andrew Jackson, Remini has been a frequent writer of popular works on American history; his topics have ranged from The Battle of New Orleans (1999) andÂ Joseph Smith (2002) to presidential inaugural speeches (Fellow Citizens,Â 2008). Here, Remini covers the whole American shebang in 368 pages, yielding a parsimonious narrative that to regular readers of American history resembles an outlineâ€”but they arenâ€™t Reminiâ€™s audience. He seems to be writing for those who needÂ anchorage in the major events in the development of the U.S., a large target indeed consideringÂ the gapsÂ in the publicâ€™s knowledge of U.S. history as revealed by occasional surveys. An instructive technique Remini usesÂ is to emphasizeÂ a precedent in history, such as the Mayflower Compact or the legislation of the First Congress under the Constitution, whose influence extends up to the present. Besides government, Remini applies this method to economics, civil rights, and foreign affairs. A good choice for general circulation needs. --Gilbert Taylor Review â€œA masterful recounting of the Amercian experience from the discovery of the New World to the present. . . . It is a perfect history for our times.â€ (Robert Dallek, author of Nixon and Kissinger) â€œIn 2008, Americans face war, terrorism, recession and the rising economies of China and India. Yet the author avers there is still reason to hope for good leadership. Astute assessments of an evolving nation and ideal reading for November voters.â€ ( Kirkus Reviews) â€œProvides everything a casual (or bewildered) reader needs to know about the United States from the first English colonists until the beginning of 2008. . . . An objective narrative of this nationâ€™s history that readers of all political stripes will appreciate.â€ ( Publishers Weekly) â€œOne of our great historians has now given us yet another great work. . . . [It] may be brief, but it is wise, eloquent and authoritative. Readers in search of a sprightly tour of the nationâ€™s lives and times need l