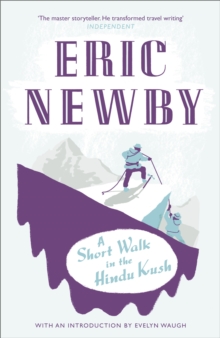 A SHORT WALK IN THE HINDU KUSH

Product Description When Eric Newby, fashion industry worker and inexperienced hill walker, decided after 10 years in haute couture he needed a change he took 4 days training in Wales then walked the Hindu Kush. This is his account of an entertaining time in the hills! About the Author Eric Newby began his travelling career in a perambulator commuting between Hammersmith Bridge, where his parents lived, and such seaside resorts as Frinton. His enthusiasm for more extensive travel was kindled by J. Arthur Mee's Children's Colour Book of Lands and Peoples which, with its photographs and descriptions of exotic places, made Newby dream of visiting them himself, something he was to fail to do for many years to come.It was not until 1938 that he was able to persuade his father to have him apprenticed in one of the big Finnish, four-masted steel barques still engaged in the Australian grain trade with Europe, a voyage brilliantly evoked in The Last Grain Race.During the War he served in the SBS and was awarded the Military Cross. This experience inspired Love and War in the Apennines - a tale of life behind enemy lines as an escaped prisoner-of-war - and brought about his meeting with the girl who was subsequently to become his wife.Eric Newby's other books include Something Wholesale, A Short Walk in the Hindu Kush, Slowly Down the Ganges, A Small Place in Italy and What the Traveller Saw. He was made CBE in 1994.