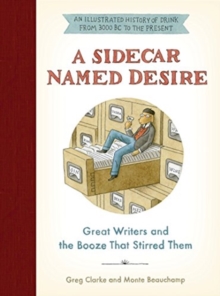 A SIDECAR NAMED DESIRE: GREAT WRITERS AND THE BOOZE THAT STIRRED THEM

Product Description A rollicking illustrated history of alcohol and its literary imbibers, from Jane Austenâ€™s beer brewing to James Joyceâ€™s passion for Guinness to E.B. Whiteâ€™s cure for writersâ€™ blockâ€”a dry martiniâ€”by celebrated illustrator Greg Clarke and award-winning editor/art director Monte Beauchamp. â€œThe tools that I need for my trade are simply pen, paper, food, tobacco, and a little whiskey.â€ Â â€”William FaulknerÂ  â€œI keep a dictionary, a Bible, a deck of cards and a bottle of sherry in the room.â€ Â Â â€”Maya AngelouÂ  â€œA writer who drinks carefully is probably a better writer.â€ Â Â â€”Stephen King Throughout history, there has been no greater catalyst for creativity among writers, so they claim, than a good, stiff drink. In this graphic volume, the authors take us on an unforgettable literary bar crawl, packed with historical factoids, anecdotes, booze trivia, and fascinating detours into the lives of our favorite writers, along with literary-themed cocktail recipes such as Ernest Hemingwayâ€™s Death in the Afternoon and Philip Larkinâ€™s Gin and Tonic set to verse. For the literary-minded drinker, whether wine, gin, vodka, beer, whiskey, or tequila is your elixir of choice, A Sidecar Named DesireÂ will whet your appetite. Bottoms up! About the Author GREG CLARKE's illustrations have appeared in publications such asÂ The New Yorker, Rolling Stone, Time Magazine, The Atlantic, Blab!,Â andÂ Mother Jones. Books that have featured Greg's illustrations include:Â How to Raise Mom and DadÂ (Dutton), Golf Rules Illustrated (Callaway Editions),Â My Fine Feathered Friend (FSF),Â Enchanted NightÂ (Random House), andÂ Masterful Marks: Cartoonists Who Change the WorldÂ (Simon & Schuster). Clarke is the recipient of three silver medals from the New York Society of Illustrators. He lives on the outskirts of Los Angeles, and some of his best (and worst) ideas have occurred while sipping an IPA or a dry gin martini. Â  MONTE BEAUCHAMP is an award-winning editor, art director, and graphic designer who has served as a juror for American Illustration, The Society of Illustrators, Communication Arts, and LÃ¼rzer's Archive. He is the founder and editor of the graphics-illustration-comics annualsÂ BLAB! and BLAB WORLD, and his books include: MASTERFUL MARKS: Cartoonists Who Changed the World (Simon & Schuster),Â STRIKING IMAGES: Vintage Matchbook Cover Art (Chronicle Books),Â and KRAMPUS: The Devil of Christmas. In 2012, Beauchamp was awarded the Society of Illustrators prestigious RICHARD GANGEL ART DIRECTORS AWARD (for outstanding contributions in promoting and advancing the art of illustration). He lives and works in Chicago and favors sidecars.