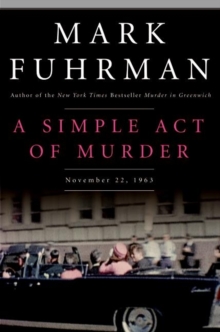 Product Description On November 22, 1963, a murder was committed in Dallas, Texas. The victim happened to be the president of the United States. More than forty years later, the case remains unsolved. Nearly 80 percent of the American people don't believe that John F. Kennedy was killed by a lone gunman, and the House Assassinations Committee has found that the president was "assassinated as the result of a conspiracy." Yet the conspirators have never been identified or brought to justice. Until now. And once you read this book, you'll know who killed JFK. A Simple Act of Murder is the investigation that this case should have had from the beginning. America's most famous detective, Mark Fuhrman -- who has cracked some of the best-known and most puzzling crimes in American history -- cuts through the myths and misinformation to focus on the hard evidence. He examines the ballistics and medical records, scrutinizes photographs from the crime scene and the famous Zapruder film, and weighs the testimony of hundreds of witnesses. Filled with vivid photos, informative diagrams, and original drawings by Fuhrman himself that show the evidence in a new light and make complex forensic matters clear and easily understood, this book is the visual record of the JFK assassination. In this gripping and highly personal account, Fuhrman unveils a major clue that had been ignored for forty years -- a breakthrough that will change the debate over the assassination. Overturning accepted notions about the way the murder occurred, A Simple Act of Murder answers many questions that have plagued the American people ever since that fateful day in Dallas: Was Lee Harvey Oswald the lone gunman, or was there a conspiracy? Could the Magic Bullet have done everything the Warren Commission claimed it did? What evidence was planted, suppressed, or destroyed? What crucial piece of evidence was missed by all the government investigations, and even the independent researchers? And, finally, who killed JFK? The answers may surprise you. From Publishers Weekly Neither Warren Commission supporters nor conspiracy theorists are likely to be satisfied by this latest true crime effort by notorious ex-LAPD detective Fuhrman, who joins a long list of authors attempting to settle the controversies surrounding the assassination of President Kennedy once and for all. Despite Furhman's long-held belief that the president was the victim of a plot, his examination of the forensic evidenceâ€”the recovered bullet fragments, the autopsy reports and the legendary Zapruder filmâ€”leads him to adopt the lone gunman theory (although he thinks that previous proponents of that position erred in believing one of Lee Harvey Oswald's shots missed its mark). This clunky, lightweight effort is unlikely to change many minds and does not begin to approach the careful, reasoned analysis of Gerald Posner's Case Closed, which also defended the first official inquiry's lone gunman theory of the murder. Nor does Fuhrman fully address the many questions raised by serious conspiracy scholars such as Anthony Summers or Robert Blakey; for example, he completely ignores arguments that Jack Ruby's connections with organized crime bear further study. Whatever the truth of the matter, readers will not be convinced by his case for the thesis that this was a "simple murder." Photos and illus. (Apr.) Copyright Â© Reed Business Information, a division of Reed Elsevier Inc. All rights reserved. Review â€œ[A] fresh take...on the JFK assasination.â€ (Kirkus Reviews) â€œ[W]ell worth reading for its clarity and single-mindedness ...a brisk read for armchair investigators.â€ (Philadelphia Inquirer) About the Author Retired LAPD detective Mark Fuhrman is the New York Times bestselling author of Murder in Brentwood, Murder in Greenwich, Murder in Spokane, and Death and Justice. He lives in Idaho.