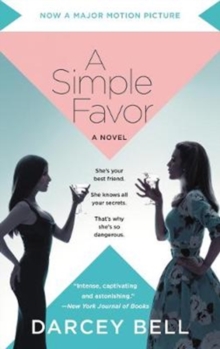 Product Description Soon to be a major motion picture from Lionsgate starring Anna Kendrick, Blake Lively and Henry Golding, and directed by Paul Feig "Riveting and brilliantly structured, A Simple Favor is an edge-of-your seat domestic thriller about a missing wife and mother that relies on a rotating cast of unreliable narrators to ingeniously examine the cost of competitive mom-friends, the toll of ordinary marital discontent and the fallacy of the picture-perfect, suburban family."â€”Kimberly McCreight, New York Times bestselling author Sheâ€™s your best friend. She knows all your secrets. Thatâ€™s why sheâ€™s so dangerous. A single mother's life is turned upside down when her best friend vanishes in this chilling debut thriller in the vein of Gone Girl and The Girl on the Train. It starts with a simple favorâ€”an ordinary kindness mothers do for one another. When her best friend, Emily, asks Stephanie to pick up her son Nicky after school, she happily says yes. Nicky and her son, Miles, are classmates and best friends, and the five-year-olds love being togetherâ€”just like she and Emily. A widow and stay-at-home mommy blogger living in woodsy suburban Connecticut, Stephanie was lonely until she met Emily, a sophisticated PR executive whose job in Manhattan demands so much of her time. But Emily doesnâ€™t come back. She doesnâ€™t answer calls or return texts. Stephanie knows something is terribly wrongâ€”Emily would never leave Nicky, no matter what the police say. Terrified, she reaches out to her blog readers for help. She also reaches out to Emilyâ€™s husband, the handsome, reticent Sean, offering emotional support. Itâ€™s the least she can do for her best friend. Then, she and Sean receive shocking news. Emily is dead. The nightmare of her disappearance is over. Or is it? Because soon, Stephanie will begin to see that nothingâ€”not friendship, love, or even an ordinary favorâ€”is as simple as it seems. A Simple Favor is a remarkable tale of psychological suspenseâ€”a clever and twisting free-fall of a ride filled with betrayals and reversals, twists and turns, secrets and revelations, love and loyalty, murder and revenge. Darcey Bell masterfully ratchets up the tension in a taut, unsettling, and completely absorbing story that holds you in its grip until the final page. Review â€œDebut-novelist Bell ramps up suspense with authority in this domestic thriller, in which actions seem as inevitable as they are chilling. The audience that made GONE GIRL a publishing sensation is likely to take to this one, too.â€ -- Booklist (starred review) â€œNo one and nothing is what it seems in this page-turner.â€ -- Cleveland Plain Dealer â€œAn intense, captivating, and astonishing thriller ending in an unforeseen and surprise ending; the premise: Be careful who you trust.â€ -- New York Journal of Books â€œBellâ€™s edgy first novel is chock-full of dirty little secrets, lies, and manipulations. Gone Girl devotees should reserve an advance copy and carve out uninterrupted time for this juicy read.â€ -- Library Journal â€œ[A] stylish and unsettling thrillerâ€¦The plot stretches into increasingly dark territory, the narrative mixing familiar gimmicks in the thriller repertoire and producing an overall story thatâ€™s just mysterious and weird enough to supply maximum satisfaction.â€ -- Toronto Star â€œThis is a psychological thriller that is as hip and relevant as it is gripping. Darcey Bell somehow manages to satirize, hilariously, the ghastly self-righteousness of the online â€˜Mommy Bloggersâ€™ while at the same time pulling off a suburban mystery that ends with a twist that is as horridly satisfying as it is completely unexpected. I couldnâ€™t stop reading about these two truly terrifying moms!â€ -- Plum Sykes, author of BERGDORF BLONDES â€œ A Simple Favor by Darcey Bell is a highly recommended, twisty domestic thrillerâ€¦My rating kept going up as I was reading. The ending was pitch-perfect.â€ -- She Treads Softly â€œWhat a wonderfully absorbing, unremittingly intense, endlessly sur