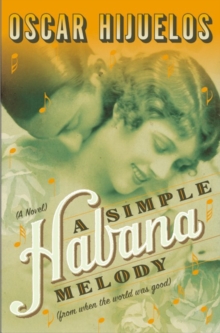 A SIMPLE HABANA MELODY: (FROM WHEN THE WORLD WAS GOOD)

Oscar Hijuelos's sixth novel, A Simple Habana Melody, is as much a love song to prewar Cuba as the "simple melody" at the center of the book. That tune, named "Roses Puras," was written by Hijuelos's protagonist, the aging composer Israel Levis, in the 1920s for his protÃ©gÃ© and secret love, the singer Rita Valladares. The novel is set just after World War II, when Levis has returned to his childhood home in Havana after many years in Europe, at first in Paris, then in Buchenwald, where he was interned by Nazis who ignored the crucifix around his neck and focused only on his Sephardic name. The bittersweet feelings Levis bears toward "Rosas Puras" ("Beautiful Roses"), his best-known song, were further complicated when a German officer, who had gathered some musically gifted inmates for a concert, asked him to play this catchy old tune, unaware that Levis had written it. But this is not primarily a war novel; it is a novel of memory, a series of visits to the beautiful, vanished world of Levis's childhood and youth seen through the lens of his later suffering. Written with the same richness of detail, sensuality, and musicality of The Mambo Kings Play Songs of Love, which won the Pulitzer Prize in 1990, A Simple Habana Melody contains even greater emotional depth and narrative complexity. --Regina Marler