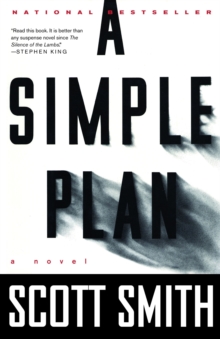 Product Description â€œSpectacular. . . . Ten shades blacker and several corpses grimmer than the novels of John Grisham. . . . Do yourself a favor. Read this book.â€ â€”Entertainment Weekly Two brothers and their friend stumble upon the wreckage of a planeâ€“the pilot is dead and his duffle bag contains four million dollars in cash. In order to hide, keep, and share the fortune, these ordinary men all agree to a simple plan. Review â€œRead this book. It is better than any suspense novel since The Silence of the Lambs.â€ â€”Stephen King Â  â€œSpectacular. . . . Ten shades blacker and several corpses grimmer than the novels of John Grisham. . . . Do yourself a favor. Read this book.â€ â€” Entertainment Weekly Â  â€œBeautifully controlled and disturbing. . . . Works a devastating variation on the idea of the banality of evil.â€ â€” The New York Times Book Review Â  â€œLike watching a train wreck. There is nothing to be done, but it is impossible to turn away.â€ â€” Chicago Tribune Â  â€œA marvel. . . . The story-twists keep you turning the pages and guessing whatâ€™s coming next. With cool precision, Smith outlines the ever-widening spiral of distrust and violence.â€ â€” The Boston Globe Â  â€œA work of deceptive simplicity and singular power. . . . To describe the fascinating parade of thoughts and deeds that lead inexorably to the bookâ€™s calamitous conclusion would give away too much of the plot.â€ â€” The Washington Post About the Author Scott Smith was educated at Dartmouth College and Columbia University. He lives in New York City. Excerpt. Â© Reprinted by permission. All rights reserved. 1 My parents died in an automobile accident the year after I was married. They tried to enter I-75 through an exit ramp one Saturday night and crashed head-on into a semi hauling cattle. My father was killed instantly in the wreck, decapitated by the hood of his car, but my mother, miraculously, survived. She lived for a day and a half more, hooked up to machines in the Delphia Municipal Hospital, her neck and back broken, her heart leaking blood into her chest. The semi driver came through it all with only a few minor bruises. His truck had caught fire, though, barbecuing the cattle, and after my mother died he sued my parentsâ€™ estate for damages. He won the suit but got no material satisfaction from it: my father had mortgaged his farm to the hilt and was teetering on the edge of bankruptcy when he died. My wife Sarahâ€™s pet theory was that heâ€™d committed suicide, driven to it by the embarrassing proliferation of his debts. I argued with her at the time, though not very wholeheartedly. In hindsight, you see, it seems that he mayâ€™ve made certain preparations. A week before the accident, he came by my house in his pickup, its truck bed packed with furniture. Sarah and I had no use for any of it, but he was insistent, threatening to head straight for the dump if we didnâ€™t accept the entire load, so I helped him carry it, piece by piece, down to the basement. After he left us, he drove over to my brother Jacobâ€™s apartment and gave him the pickup. There was also his will, the first clause of which was an injunction upon Jacob and me that we swear orally, in each otherâ€™s presence, to visit his grave every year, without fail, on his birthday. It continued from there, a bizarrely elaborate document, pages and pages, going through the old farmhouse room by room, bequeathing each object to us by name, no matter how trivial or inconsequentialâ€”a shaving kit, a broom, and an old Bible for Jacob; a broken blender, a pair of work boots, and a black stone paperweight in the shape of a crow for me. It was pointless, of course, wasted effort. We had to sell everything of any value to pay the debts heâ€™d left behind, and the things of no value we had no use for. We had to sell the farm, too, our boyhood home. A neighbor bought it, grafting it to his own land, absorbing it like a giant amoeba. He knocked down the house, filled in the basement, and planted a soybean field on t