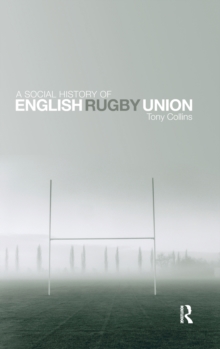 Product Description From the myth of William Webb Ellis to the glory of the 2003 World Cup win, this book explores the social history of rugby union in England. Ever since Tom Brownâ€™s Schooldays the sport has seen itself as the guardian of traditional English middle-class values. In this fascinating new history, leading rugby historian Tony Collins demonstrates how these values have shaped the English game, from the public schools to mass spectator sport, from strict amateurism to global professionalism. Based on unprecedented access to the official archives of the Rugby Football Union, and drawing on an impressive array of sources from club minutes to personal memoirs and contemporary literature, the book explores in vivid detail the key events, personalities and players that have made English rugby. From an era of rapid growth at the end of the nineteenth century, through the terrible losses suffered during the First World War and the subsequent â€˜rush to rugbyâ€™ in the public and grammar schools, and into the periods of disorientation and commercialisation in the 1960s through to the present day, the story of English rugby union is also the story of the making of modern England. Like all the very best writers on sport, Tony Collins uses sport as a prism through which to better understand both culture and society. A ground-breaking work of both social history and sport history, A Social History of English Rugby Union tells a fascinating story of sporting endeavour, masculine identity, imperial ideology, social consciousness and the nature of Englishness. Review Inaugural World in Union Book Award for Best Authored/Edited Book Presented by the World Rugby Museum 2015 "This is sports history at its best â€“ bringing the skills and standards of serious history to areas too often dominated by myth and hearsay. With an eye for anecdote, Collins makes a serious contribution to our knowledge of English rugby and disposes of more than a few conventional assumptions about the modern game." Huw Richards, Financial Times "This is a masterful analysis of the creation and culture of English rugby. In telling this compelling story Collins has lit up the past in a way that could provide answers to current problems, on and off the field, if English rugby is prepared to confront its own history." Spiro Zavos, Sydney Morning Herald "A brilliant book", Yorkshire Evening Post "Tony Collins' engrossing history is full of unexpected facts â€“ for instance, in the 1880s rugby was far more popular in the north than association football, and the Yorkshire Cup attracted greater crowds than the FA Cup final. But it also examines the conservative, middle-class social attitudes that have always underpinned the game." Simon Redfern, The Independent, Sports Book of the Week "An unexpected treat", Peter Wilby, New Statesman "Well researched and written, as may be expected from a Professor of the Social History of Sport, Collins takes his academic skills and creates a very readable overview of why and how the game of Rugby Union has evolved within England.Â Â I found it an immensely enjoyable and informative read and quite accessible to both the student and casual reader alike." Adrian Hunter, The Rugby History Society "A fascinating look at the construction of England's rugby identity", Michael Moynihan, Irish Examiner "I would warmly recommend it to anyone whose main interest lies in league [sic]",Â Dave Hadfield, Rugby League WorldÂ  "What do you get when you mix one of the world's leading sports historians with one of the best sports archives bar none?Â  One hell of a read, that's what.Â  A must for your bookshelf", Alan Pearey, Rugby World magazine "A work of this quality is deserving of readership beyond just historians of the rugby codes, and indeed beyond the ranks of sports historians. Collins is simply an outstanding historian, and this study certainly fits as easily into the realm of social history as it does to sport ... an excellent work t