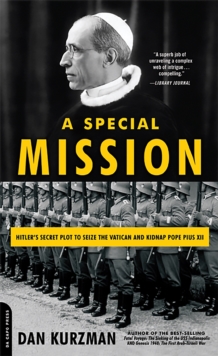 In September, 1943, Adolf Hitler, furious at the ouster of Mussolini, sent German troops into Rome with plans to deport Rome's Jews to Auschwitz. Hitler also ordered SS General Karl Wolff, who had been Heinrich Himmler's chief aide, to occupy the Vatican and kidnap Pope Pius XII. But Wolff began playing a dangerous game: stalling Hitler's kidnap plot, while blackmailing the pope into silence as the Jews were rounded up. This tale of intrigue and betrayal is one of the most important untold stories of World War II, and A Special Mission is the only book to give the full incredible account of Hitler's kidnap plot and its far-reaching consequences.