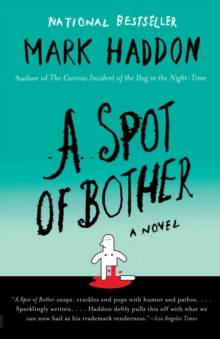 A SPOT OF BOTHER

Product Description A Spot of BotherÂ is Mark Haddonâ€™s unforgettable follow-up to the internationally beloved bestsellerÂ The Curious Incident of the Dog in the Night-Time. At sixty-one, George Hall is settling down to a comfortable retirement. When his tempestuous daughter, Katie, announces that she is getting married to the deeply inappropriate Ray, the Hall family is thrown into a tizzy. Unnoticed in the uproar, George discovers a sinister lesion on his hip, and quietly begins to lose his mind. As parents and children fall apart and come together, Haddon paints a disturbing yet amusing portrait of a dignified man trying to go insane politely.A Washington Post Best Book of the Year Review â€œA Spot of Bother snaps, crackles and pops with humor and pathos. . . . Sparklingly written. . . . Haddon deftly pulls this off with what we can now hail as his trademark tenderness.â€Â â€”Los Angeles Times "Totally brilliant. . . . Wondrously articulate.... A Spot of Bother serves as a fine example of why novels exist.â€Â â€”The New York Times Book Review â€œSuperbly entertaining.â€Â â€”The Washington Post Book World â€œ[Haddonâ€™s] craftsmanship is dazzling, his sense of character profound, his kindness toward his creations that of a consummate caregiver. Humorous, occasionally heart-rending and always enthralling, A Spot of Bother is a wonder and a joy.â€Â â€”Chicago Sun-Times About the Author Mark Haddon is the author of the bestselling novelsÂ The Red HouseÂ andÂ A Spot of Bother, and the short story collection The Pier Falls and Other Stories.Â His novelÂ The Curious Incident of the Dog in the Night-TimeÂ won the Whitbread Book of the Year Award and the Los Angeles Times Book Prize for First Fiction and is the basis for the Tony Awardâ€“winning play. He is the author of a collection of poetry,Â The Talking Horse and the Sad Girl and the Village Under the Sea,Â has written and illustrated numerous childrenâ€™s books, and has won awards for both his radio dramas and his television screenplays. He teachesÂ creative writing for the Arvon Foundation and lives in Oxford, England. Excerpt. Â© Reprinted by permission. All rights reserved. 1 It began when George was trying on a black suit in Allders the week before Bob Greenâ€™s funeral. It was not the prospect of the funeral that had unsettled him. Nor Bob dying. To be honest he had always found Bobâ€™s locker-room bonhomie slightly tiring and he was secretly relieved that they would not be playing squash again. Moreover, the manner in which Bob had died (a heart attack while watching the Boat Race on television) was oddly reassuring. Susan had come back from her sisterâ€™s and found him lying on his back in the center of the room with one hand over his eyes, looking so peaceful she thought initially that he was taking a nap. It would have been painful, obviously. But one could cope with pain. And the endorphins would have kicked in soon enough, followed by that sensation of oneâ€™s life rushing before oneâ€™s eyes which George himself had experienced several years ago when he had fallen from a stepladder, broken his elbow on the rockery and passed out, a sensation which he remembered as being not unpleasant (a view from the Tamar Bridge in Plymouth had figured prominently for some reason). The same probably went for that tunnel of bright light as the eyes died, given the number of people who heard the angels calling them home and woke to ?nd a junior doctor standing over them with a defibrillator. Then . . . nothing. It would have been over. It was too early, of course. Bob was sixty-one. And it was going to be hard for Susan and the boys, even if Susan did blossom now that she was able to finish her own sentences. But all in all it seemed a good way to go. No, it was the lesion which had thrown him. He had removed his trousers and was putting on the bottom half of the suit when he noticed a small oval of puffed flesh on his hip, darker than the surrounding skin and flaking slightly. His stomach rose and he was forced