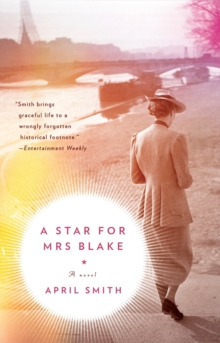 A STAR FOR MRS. BLAKE

Product Description An emotionally charged historical novel based on the Gold Star Mothers. Cora Blake never dreamed sheâ€™d go to Paris. Sheâ€™s hardly ever left the small fishing village where she grew up. Yet in the summer of 1931, she is invited to travel to France with hundreds of other Gold Star Mothers, courtesy of the U.S. government, to say goodbye to their fallen sons, American casualties of World War I who were buried overseas. Chaperoned by a dashing West Point officer, Coraâ€™s group includes the wife of an immigrant chicken farmer; a housemaid; a socialite; a former tennis star in precarious mental health; and dozens of other women from all over the country. Along the way, the women will forge lifelong friendships as they face a death, a scandal, and a secret revealed. Review â€œ A Star for Mrs. Blake is a beautifully written, meticulously researched slice of American history. April Smithâ€™s poignant and tender story of five courageous World War I Gold Star mothersâ€™ amazing journey across the sea is one you will never forget.â€ â€”Fannie Flagg â€œ[Smith] brings graceful life to a wrongly forgotten historical footnote.â€ â€” Entertainment Weekly â€œDetailed and colorful . . . A story of Americaâ€”rich in the lives of each of the characters.â€ â€” Pittsburgh Post-Gazette Â  â€œVivid and utterly unforgettable..â€ â€” The Globe and Mail (Toronto) â€œCompelling. . . . A first-rate novel that is well worth reading.â€ â€” The Huffington Post â€œMoving and surprising. . . . Smith, a lucid writer with a detectiveâ€™s eye for detail, doesnâ€™t let us forget the painful event that launched her heroineâ€™s journey.â€ â€” BookPage Â â€œA sensitively drawn portrait of an obscure but consequential event. It is also a story that highlights the power of female community, how that bond can help mitigate even a grief that has no end.â€ â€”WBUR.org â€œApril Smith has written a beautiful and unforgettable novel about five Gold Star Mothers whose stories are both personal and universal. WritingÂ  A Star for Mrs. BlakeÂ must have been a labor of love and it shows on every page. Everyone who has served or is serving in the military, and also their families and friends, should read this book.â€ â€”Nelson DeMille â€œSmith writes with great depth of detail and of emotion, giving voice to . . . [these] Gold Star Mothers who traveled from America to their sonsâ€™ graves in France.â€ â€” Historical Novel SocietyÂ  â€œRiveting. . . Smith has told this story with memorable characters and truly beautiful writing.â€ â€” Hudson Valley News â€œSmith captures the mothersâ€™ interactions in beautiful detail.â€ â€” Publishers Weekly â€œCaptivating and enlightening. . . . A heartfelt glimpse into a little-known episode in U.S. history.â€ â€” Booklist (starred review) About the Author April Smith is the author of the successful novels featuring FBI Special Agent Ana Grey as the central character. She is also an Emmy-nominated television writer and producer. In her research forÂ  A Star for Mrs. Blake,Â she traveled to Maine, New York City, Paris, Verdun, and the Meuse-Argonne American Cemetery. Her home base is Santa Monica, California, where she lives with her husband.Â  Excerpt. Â© Reprinted by permission. All rights reserved. Excerpted from the hardcover edition 1 February Cora Blake was certainly not planning on going to Paris that spring. Or ever in her lifetime. She was the librarian in a small town on the tip of an island off the coast of Maine, which didnâ€™t mean sheâ€™d never traveled. She did spend two years at Colby College in Waterville and visited family in Portland, went to Arizona once, and if you counted yachting, knew most of the New England coast. Her mother had been the great adventurer, married to a sea captain whoâ€™d taken her all around the world. Cora was born off the coast of Rio de Janeiro, which might account for her venturesome spirit, but now she roamed only in books. Summer people from North Carolina and Boston would stop by the quaint old library building to chat, and wonder how