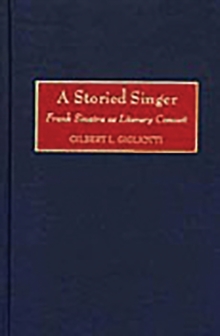 A STORIED SINGER: FRANK SINATRA AS LITERARY CONCEIT (CONTRIBUTIONS TO THE STUDY OF POPULAR CULTURE)

Frank Sinatra forever altered American art and culture. His life and work is mythified in countless books and essays. This book offers a much-needed fresh approach to The Chairman of the Board. Artists from all varieties of media have used Sinatra to create their own works and, in many cases, their own Sinatras. Sinatra's legacy is not confined to the music he created?his shadow, his aura, and his mere existence helped to inform the lives and works of generations. Gigliotti examines how genre and literary fiction, lyric and satiric poetry, rock and folk music, and even domestic drama have conjured and symbolically employed the legendary singer.

Each of the eleven chapters of A Storied Singer details a different use of Sinatra. Subjects include the lyrics of Sammy Cahn, recent novels such as The Death of Frank Sinatra, and the many songs that are about or mention Old Blue Eyes. Gigliotti also examines Sinatra as seen through international eyes, from British songwriters and Spanish novelists to American expatriates and Israeli filmmakers, providing an unusual and fascinating look at a major American figure.