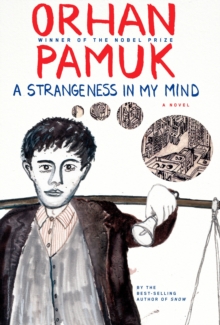 A STRANGENESS IN MY MIND: A NOVEL

Product Description From the Nobel Prize winner and best-selling author of Snow and My Name Is Red: a soaring, panoramic new novelâ€”his first since The Museum of Innocenceâ€”telling the unforgettable tale of an Istanbul street vendor and the love of his life. Since his boyhood in a poor village in Central Anatolia, Mevlut Karata? has fantasized about what his life would become. Not getting as far in school as heâ€™d hoped, at the age of twelve he comes to Istanbulâ€”â€œthe center of the worldâ€â€”and is immediately enthralled by both the old city that is disappearing and the new one that is fast being built. He follows his fatherâ€™s trade, selling boza (a traditional mildly alcoholic Turkish drink) on the street, and hoping to become rich, like other villagers who have settled the desolate hills outside the booming metropolis. But luck never seems to be on Mevlutâ€™s side. As he watches his relations settle down and make their fortunes, he spends three years writing love letters to a girl he saw just once at a wedding, only to elope by mistake with her sister. And though he grows to cherish his wife and the family they have, he stumbles toward middle age in a series of jobs leading nowhere. His sense of missing something leads him sometimes to the politics of his friends and intermittently to the teachings of a charismatic religious guide. But every evening, without fail, Mevlut still wanders the streets of Istanbul, selling boza and wondering at the â€œstrangenessâ€ in his mind, the sensation that makes him feel different from everyone else, until fortune conspires once more to let him understand at last what it is he has always yearned for. Told from different perspectives by a host of beguiling characters, A Strangeness in My Mind is a modern epic of coming of age in a great city, a brilliant tableau of life among the newcomers who have changed the face of Istanbul over the past fifty years. Here is a mesmerizing story of human longing, sure to take its place among Pamukâ€™s finest achievements. Review â€œMagnificent . . . a robust, affectionate chronicle . . . The book spills over with detail . . . [and] each of its sections . . . has the amplitude of most single novels . . . With the lightest of touches, [Pamuk] crosses his charactersâ€™ everyday routines against large-scale social and political disturbances . . .Â  [Readers] wonâ€™t forget Mevlut or Mr. Pamukâ€™s Istanbul. Both seem too vital to exist only in the pages of a book.â€ â€”Sam Sacks, The Wall Street Journal â€œA complex psychological drama . . . [and] a tremendous concatenation of voices and places and politics and culture, gathered around a melancholy hero . . . [written with] virtuosic craft, intellectual richness, emotional subtlety and a feeling of freedom that comes from a narrative that finds its most meaningful moments in the side streets of storytelling . . . [ A Strangeness in My Mind] wrestles with the complexity of an ever-changing city . . . Most delightful are first-person monologues by the characters themselves . . . Itâ€™s very funny, while also allowing into Mevlutâ€™s tale the colorful voices and contending perspectives of the world around him . . . For Pamuk the vision of life as a complex web of knowable things provides a terrifically interesting way to write a book.â€ â€”Martin Riker,Â TheÂ New York Times Book Review â€œOne of Pamukâ€™s most enjoyable novels and an ideal place to begin for readers who want to get to know him . . . Pamuk does for Istanbul something like what James Joyce did for Dublin . . . He captures not just the look and feel of the city, but its culture, its beliefs and traditions, its people and their values . . . A love letter to modern Turkey.â€ â€”Adam Kirsch, The Washington Post Â  â€œPamukâ€™s boundless compassion . . . makes the life of a struggling street vendor become, on the page, as monumental and as worthy of our attention as a sultanâ€™s . . . [His] impulse to ennoble the most humble among us is perhaps the best reason to read Pamukâ€™s work . . . Si