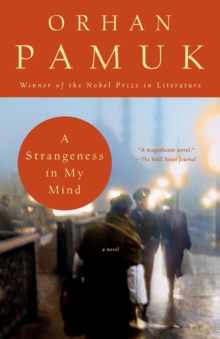 A STRANGENESS IN MY MIND: A NOVEL (VINTAGE INTERNATIONAL)

Product Description Arriving in Istanbul as a boy, Mevlut Karata? is enthralled by both the old city that is disappearing and the new one that is fast being built. He becomes a street vendor, like his father, hoping to strike it rich, but luck never seems to be on Mevlutâ€™s side. He spends three years writing love letters to a girl he has seen just once, only to elope by mistake with her sister. Although he grows to cherish his wife and the family they have together, Mevlut stumbles toward middle age as everyone around him seems to be reaping the benefits of a rapidly modernizing Turkey. Told through the eyes of a diverse cast of characters, in A Strangeness in My Mind Nobel-prize-winning author Orhan Pamuk paints a brilliant tableau of life among the newcomers who have changed the face of Istanbul over the past fifty years. Review One of the Best Books of the Year The Washington Post â€¢ The Wall Street Journal â€¢ San Francisco Chronicle â€¢ Financial Times â€¢ Los Angeles Times â€¢ The Boston Globe â€¢ Milwaukee Journal Sentinel â€œA magnificent novel.â€ â€” The Wall Street Journal â€œPamuk does for Istanbul something like what James Joyce did for Dublin. He captures not just the look and feel of the city, but its culture, its beliefs and traditions, its people and their values.â€ â€” The Washington Post â€œDelightful. . . . Tremendous. . . . [Written with] virtuosic craft, intellectual richness, emotional subtlety and a feeling of freedom.â€ â€” The New York Times Book Review Â  â€œComplex, ambitious. . . . It is Pamukâ€™s boundless compassion that makes the life of a struggling street vendor become, on the page, as monumental and as worthy of our attention as a sultanâ€™s.â€ â€”Anthony Marra,Â  San Francisco Chronicle â€œAn unconventional love story. . . . A hymn to lifeâ€™s physical and mental chaos.â€ â€” The New York Times Â  â€œReading Pamuk is like sipping a glass of fine wine or reading a late Dickens novel. Writers donâ€™t get any better. . . . WithÂ  A Strangeness in My MindÂ the author has made Istanbul into one of the worldâ€™s great literary cities.â€ â€” Counterpunch Â  â€œA glorious and teeming everyman epic.â€ â€” The Boston Globe Â  â€œA remarkable feat. . . . Light and funny. Pamukâ€™s perspective is generous. He takes a long view of history. The intermingling, and clashes, of cultures and peoples are part of what makes a city great, he suggests.â€ â€” Chicago Tribune â€œPoignant. . . . There are no uncomplicated human beings for Pamuk, who takes as one of his principal themes here the gulf between what people say publicly and think privately.â€ â€” Los Angeles Times Â  â€œA textured and rewarding narrative.â€ â€” The Economist Â  â€œWarm and gently engrossing. . . . At its heart, this is a novel about work, love and family.â€ â€” The Sunday TimesÂ (London) Â  â€œBeautifully done, suffused with a nostalgic light.â€ â€” Financial Times Â  â€œPassages recall Wordsworth, that champion walker from whose greatest poem Pamuk takes this novelâ€™s title. . . . [A] humble boza seller and his transfiguring imagination underscore why weâ€™re drawn to the Nobel-winning double who has imagined him.â€ â€” Milwaukee Journal Sentinel Â  â€œMagnificent. . . . Pamuk is becoming that rare author who writes his best books after winning the Nobel Prize for Literature.â€ â€” The IndependentÂ (London) Â  â€œA fictional continuation of Istanbul. . . . A nuanced novel that asks questions many are too afraid to utter: What if we are left behind, unable to adapt to a rapidly changing world? What if we dedicate our life to something that doesnâ€™t matter?â€ â€” Pittsburgh Post-Gazette Â  â€œMesmerizing. . . . A thoroughly immersive journey through the arteries of Pamukâ€™s culturally rich yet politically volatile and class- and gender-divided homeland.â€ â€” Publishers WeeklyÂ (starred) Â  â€œ A Strangeness in My Mind is more than a coming-of-age story. It is also about the transformation of a city and a fascinating one at that.â€ â€” Portland Press Herald Â  â€œRich, complex, and pulsing with urban life: one of this gifted writer