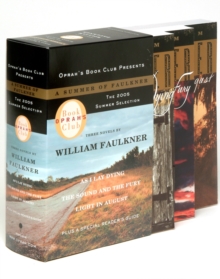 A SUMMER OF FAULKNER: AS I LAY DYING/THE SOUND AND THE FURY/LIGHT IN AUGUST (OPRAH'S BOOK CLUB)

Product Description The 2005 Summer Selection is available in an exclusive three volume boxed edition that includes a special readerâ€™s guide with an introduction by Oprah Winfrey.Titles include: As I Lay Dying This novel is the harrowing account of the Bundren familyâ€™s odyssey across the Mississippi countryside to bury Addie, their wife and mother. Told in turns by each of the family membersâ€“including Addie herselfâ€“the novel ranges in mood from dark comedy to the deepest pathos. Originally published in 1930. The Sound and the Fury First published in 1929, Faulkner created his â€œheartâ€™s darling,â€ the beautiful and tragic Caddy Compson, whose story Faulkner told through separate monologues by her three brothersâ€“the idiot Benjy, the neurotic suicidal Quentin and the monstrous Jason. Light in August Light in August, a novel about hopeful perseverance in the face of mortality, features some of Faulknerâ€™s most memorable characters: guileless, dauntless Lena Grove, in search of the father of her unborn child; Reverend Gail Hightower, who is plagued by visions of Confederate horsemen; and Joe Christmas, a desperate, mysterious drifter consumed by his mixed ancestry. Originally published in 1932. Take a seat in Oprahâ€™s Classroom and sign up for Faulkner 101 on www.oprah.com/bookclub. From the Inside Flap The 2005 Summer Selection is available in an exclusive three volume boxed edition that includes a special reader's guide with an introduction by Oprah Winfrey. About the Author William Cuthbert Faulkner was born in 1897 in New Albany, Mississippi, the first of four sons of Murry and Maud Butler Falkner (he later added the â€œuâ€ to the family name himself). In 1904 the family moved to the university town of Oxford, Mississippi, where Faulkner was to spend most of his life. He was named for his great-grandfather â€œThe Old Colonel,â€ a Civil War veteran who built a railroad, wrote a bestselling romantic novel called The White Rose of Memphis, became a Mississippi state legislator, and was eventually killed in what may or may not have been a duel with a disgruntled business partner. Faulkner identified with this robust and energetic ancestor and often said that he inherited the â€œink stainâ€ from him. Never fond of school, Faulkner left at the end of football season his senior year of high school, and began working at his grandfatherâ€™s bank. In 1918, after his plans to marry his sweetheart Estelle Oldham were squashed by their families, he tried to enlist as a pilot in the U.S. Army but was rejected because he did not meet the height and weight requirements. He went to Canada, where he pretended to be an Englishman and joined the RAF training program there. Although he did not complete his training until after the war ended and never saw combat, he returned to his hometown in uniform, boasting of war wounds. He briefly attended the University of Mississippi, where he began to publish his poetry. After spending a short time living in New York, he again returned to Oxford, where he worked at the university post office. His first book, a collection of poetry, The Marble Faun, was published at Faulknerâ€™s own expense in 1924. The writer Sherwood Anderson, whom he met in New Orleans in 1925, encouraged him to try writing fiction, and his first novel, Soldierâ€™s Pay, was published in 1926. It was followed by Mosquitoes. His next novel, which he titled Flags in the Dust, was rejected by his publisher and twelve others to whom he submitted it. It was eventually published in drastically edited form as Sartoris (the original version was not issued until after his death). Meanwhile, he was writing The Sound and the Fury, which, after being rejected by one publisher, came out in 1929 and received many ecstatic reviews, although it sold poorly. Yet again, a new novel, Sanctuary, was initially rejected by his publisher, this time as â€œtoo shocking.â€ While working on the night shift at a power plant, Faulkner wrote what he was determined would b