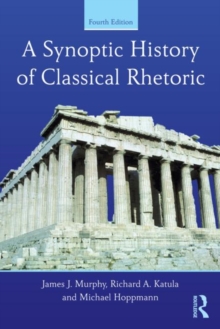 A SYNOPTIC HISTORY OF CLASSICAL RHETORIC

Product Description Continuing its tradition of providing students with a thorough review of ancient Greek and Roman rhetorical theory and practices, A Synoptic History of Classical Rhetoric is the premier text for undergraduate courses and graduate seminars in the history of rhetoric. Offering vivid examples of each classical rhetor, rhetorical period, and source text, students are led to understand rhetoric's role in the exchange of knowledge and ideas. Completely updated throughout, Part I of this new edition integrates new research and expanded footnotes and bibliographies for students to develop their own scholarship. Part II offers eight classical texts for reading, study, and criticism, and includes discussion questions and keys to the text in Part I. About the Author James J. "Jerry" Murphy (Ph.D., Stanford University, 1957) is Emeritus Professor at the University of California, Davis. He is the author or editor of 21 books and more than 70 scholarly articles. His book Rhetoric in the Middle Ages was acknowledged with the 1975 Speech Communication Association Book Award. He is a Fellow of the Medieval Academy of America, and a Fellow of the Rhetoric Society of America. He was the founding Editor (1983â€“88) of Rhetorica, journal of the International Society for the History of Rhetoric. He was until 1995 the publisher of Hermagoras Press, devoted to publishing books related to language use. Hermagoras Press is now an imprint of Routledge Publishers. His most recent edited book is A Short History of Writing Instruction from Ancient Greece to Contemporary America (Routledge, 2012). His professional motto is a line from Thomas Aquinas: "Teachers donâ€™t teach, learners learn." Richard A. Katula (Ph.D., University of Illinois, C-U, 1974) is a Professor in the Department of Communication Studies at Northeastern University. Professor Katula has authored Principles and Patterns of Public Speaking (1987) and The Eloquence of Edward Everett (2010). He has also co-authored two books, Communication: Writing and Speaking and A Synoptic History of Classical Rhetoric, 3rd Ed. (2003). Professor Katulaâ€™s documentary video on The Gettysburg Address: A Speech for the Ages (2000) was awarded the Eastern Communication Associationâ€™s Everett Lee Hunt prize for scholarship. Professor Katula is the Director of "The Lyceum and Public Culture: the Rhetoric of Idealism, Opportunity, and Abolition," sponsored by the National Endowment for the Humanities. He directs a "Dialogue of Civilizations" program to Greece every summer, and is fond of the expression, "Respect speaks when spoken to." Michael J. Hoppmann (Ph.D., University of TÃ¼bingen,) is a lecturer in the Department of Communication Studies at Northeastern University. He has authored Argumentative Verteidigung [Argumentive Defense] and co-authored four books on applied argumentation, debate, and rhetoric in German. In addition, he has contributed numerous articles on classical rhetoric and modern argumentation theory to German and English publications, including a number of entries to two of the largest rhetorical lexica, the Historisches WÃ¶rterbuch der Rhetorik [Historical Lexicon of Rhetoric] and the Handbuch der Sprach- und Kommunikationswissenschaft[Handbook of Linguistics and Communication Science]. Before coming to the U.S., Dr. Hoppmann worked at the University of TÃ¼bingen (Germany) where he wrote his dissertation on stasis theory under the supervision of Joachim Knape and Frans van Eemeren. He teaches courses in argument, debate, and public speaking.