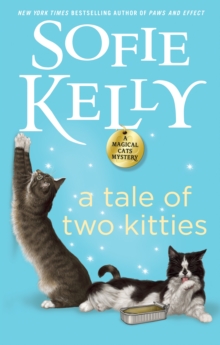 Product Description In this charming mystery from the bestselling author of The Cats Came Back, two magical cats have powers of detection that prove indispensable to librarian Kathleen Paulsonâ€¦ Â  With a well-placed paw on a keyboard or a pointed stare, Kathleenâ€™s two cats, Hercules and Owen, have helped her to solve cases in the pastâ€”so she has learned to trust their instincts. But she will need to rely on them more than ever when a twenty-year-old scandal leads to murderâ€¦ Â  The arrival of the Janes brothers has the little town of Mayville Heights buzzing. Everyone of a certain age remembers when Victor had an affair with Leoâ€™s wife, who then died in a car accident. Â  Now it seems the brothers are trying to reconcile, until Kathleen finds Leo dead. The police set their sights on Leoâ€™s son and Kathleenâ€™s good friend Simon, who doesnâ€™t have much of an alibi. To prove her friend innocent, Kathleen will have to dig deep into the town's historyâ€”and into her sardine cracker supply, because Owen and Hercules don't work for free... Review Praise for the New York Times Bestselling Magical Cat Mysteries Â  â€œOwen and Hercules are a delight.â€â€”Kings River Life Magazine Â  â€œIf you are a fan of Miranda Jamesâ€™s Cat in the Stacks mysteries, you will want to read [this series].â€â€”MyShelf.com Â  â€œCoziness at its finest. I adore those magical cats!â€â€”Socratesâ€™ Book Reviews Â  â€œWith great characters and an interesting story, readers will be in for a treat with this classic whodunit.â€â€” RT Book Reviews Â  â€œSmall-town charm and a charming cat duo make this every cat fancierâ€™s dream.â€â€”The Mystery Reader About the Author Sofie Kelly is a New York Times bestselling author and mixed-media artist who lives on the East Coast with her husband and daughter. She writes the New York Times bestselling Magical Cats Mysteries ( Paws and Effect, Faux Paws, A Midwinterâ€™s Tail) and, as Sofie Ryan, writes the New York Times bestselling Second Chance Cat Mysteries ( Telling Tails, A Whisker of Trouble, Buy a Whisker). Excerpt. Â© Reprinted by permission. All rights reserved. ***This excerpt is from an advance uncorrected copy proof*** Copyright Â© 2017 Sofie Kelly Â  Chapter 1 Youâ€™d think by now it wouldnâ€™t bother me to step on a body in the middle of the kitchen floor, but I was in my sock feet and the bodyâ€”missing its head, no surpriseâ€”was damp. With cat slobber. â€œOwen!â€ I yelled, hopping on one foot while I rubbed the other against my pant leg. The cat stuck his gray tabby head around the living room doorway and looked at me, face tipped quizzically to one side. â€œCome and get this,â€ I said, pointing at the headless yellow catnip chicken, aka Fred the Funky Chicken, Iâ€™d just stepped on. He craned his neck to see what I was referring to, then gave a murp of recognition almost as though he were saying, â€œSo thatâ€™s where I left it.â€ He came across the floor, picked up the chicken body in his mouth and deposited it next to his food dish beside the refrigerator, nudging it out of the way with one paw. Then he turned to look at me. â€œThank you,â€ I said. I leaned down to pick up the few bits of catnip that had fallen out of the mangled cat toy. Owen had a thing for catnip in general, and neon-yellow chickens stuffed with it in particular, and I had friends who bought them for him just about as fast as he could chew them apart. I dumped the bits of dried catnip in the garbage and reached for my shoes on the mat near the back door. â€œMrr?â€ Owen said. â€œI have a meeting at the library.â€ He immediately raised his paw and took a couple of passes at his face with it. Then he crossed to sit in front of the kitchen door. I knew what that meant. â€œNo, you canâ€™t come with me,â€ I said. He glanced over his shoulder at me. â€œMrr,â€ he said again. I shook my head. â€œYou canâ€™t come. Cats donâ€™t belong at the library.â€ They didnâ€™t belong at the library, but both of mine had ended up there more than once. â€œJust because Iâ€™m the head librarian doesnâ€™t mean that you and your br