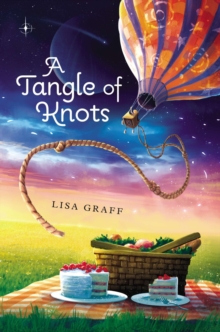 A TANGLE OF KNOTS

Product Description National Book Award nominee!The magic of Savvy meets the complexity of When You Reach Me in this "blithe magical puzzle." --The Wall Street Journal Told in multiple viewpoints, A Tangle of Knots is a magnificent puzzle. In a slightly magical world where everyone has a Talent, eleven-year-old Cady is an orphan with a phenomenal Talent for cake baking.Â But little does she know that fate has set her on aÂ journey from the moment she was born. AndÂ her destiny leads her toÂ a mysterious address that houses a lost luggage emporium, anÂ old recipe, a family of children searching for their own Talents,Â and a Talent Thief who willÂ alter her lifeÂ forever. However, these encounters hold the key to Cady's past and how she became an orphan. If she's lucky, fate may reunite her with her long-lostÂ parent.Â  Lisa Graff adds aÂ pinch of magic to aÂ sharply craftedÂ plot to create a novel that will have readers wondering about fate and the way we're all connected. Praise for A TANGLE OF KNOTS "Lisa Graff has created a beautiful world of deliciously interconnected stories that draw you in." --Abby West, Entertainment Weekly [A-] * "Subtle and intricate, rich with humor and insight, this quietly magical adventure delights." -- Kirkus Reviews, starred review * "Combining the literary sensibility of E. B. White with the insouciance of Louis Sachar, Graff has written a tangle that should satisfy readers for years to come." -- Booklist, starred review "Graffâ€™s story has a warmth and gentle humor that, along with the premise, calls to mind Ingrid Lawâ€™s Savvy." -- Publishers Weekly From School Library Journal Gr 3-7-Graff has created a world very much like our own, but just a little bit magical. In this version of Poughkeepsie, New York, many lucky people have Talent, one skill that makes them special. Cady, an orphan who lives with kindly Miss Mallory, can look at a person and immediately know what they like and bake their ideal cake. Miss Mallory's talent is finding just-right parents for orphans, but so far, she hasn't felt that perfect-parent pull for Cady. While the 11-year-old is the star of this tale, the novel integrates an expertly developed cast of supporting characters who all have their own amazing stories. Not until the very end do readers see how their paths intertwine. The plot twists deliciously around an irresistible peanut butter factory, an evil Talent thief, a very important hair pin, and a rare powder-blue suitcase that could hold the key to everything. Sprinkled throughout is a generous helping of cake recipes, perfectly suited to each of the characters, just begging to be tried. Recommend this one to fans of Sheila O'Connor, who will appreciate the charming and unusual setting, and Wendy Mass, for those who like a little dose of fantasy thrown in with their realism.-Mandy Laferriere, Staley Middle School, Frisco, TX?(c) Copyright 2011. Library Journals LLC, a wholly owned subsidiary of Media Source, Inc. No redistribution permitted. From Booklist *Starred Review* Although she is the last orphan who has not yet been placed in an adoptive home by her orphanageâ€™s matron, 11-year-old Cady is cheerful, and she possesses a talent that cheers others: she can bake just the perfect cake to suit the disposition of anyone for whom she cares. Graff, whose middle-grade titles include The Thing about Georgie (2007), blends this delicious premise craftily into another story featuring a suitcase lost many years earlierâ€”and the gruff old man who seeks to reclaim it. The knot tying these two strands becomes even more elaborate with the introduction of a family of five, including a 6-year-old and his pet ferret. With grace and charm, as well as recipes for Cadyâ€™s various cakes, Graff develops a clever series of plot twists and eccentric, fully formed individuals, each of whom has his or her own secrets, worries, and points of intersection with the knotty problems arising for the other characters. Complex without ever