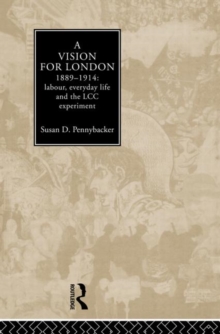 Product Description The London County Council was a the world's largest municipal government and a laboratory for social experimentation before the Great War. It sought to master the problems of metropolitan amelioration, political economy and public culture. Pennybacker's social history tests the vision of London Progressivism against its practitioners' accomplishments. She argues that the historical memory of the hopes inspired by LCC achievement and the disillusions spawned by failure, are potent forces in today's deeply ambivalent responses to metropolitan politics in London. The `new women', bohemian London, scandal in the building industry, midwifery, lodging houses, children's provision and the music hall were all provocative issues in LCC work. Their story richly evokes life in the turn-of-the-century metropolis and illustrates the complexities of `municipal socialism'. Review Pennybacker provides a useful look at the sprawling municipal authority that was the LCC. She gives a well-researched and lucid account of the LCC's projects, scandals, ideals, and politics. The book's ulitmate strength is its wealth of evidence and its nuanced look at the Progressive project. ?Albion, spring 97 About the Author Susan D. Pennybacker is Associate Professor of History at Trinity College in Hartford. She is President of the Northeast Conference on British Studies (1993-1995) and a contributor to several volumes of essays in social history, including David Feldman and Gareth Stedman Jones, Metropolis: London Histories and Representations Since 1800 (Routledge, 1989). She has taught as a visiting faculty member in history at New York University, Wesleyan University and the City College of New York, where she was also a Rockefeller/Arturo Schomburg Fellow. She is a founder of the Hartford Studies Project in urban history.