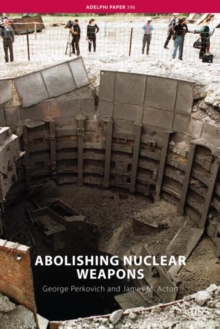 Product Description Nuclear disarmament is firmly back on the international agenda. But almost all current thinking on the subject is focused on the process of reducing the number of weapons from thousands to hundreds. This rigorous analysis examines the challenges that exist to abolishing nuclear weapons completely, and suggests what can be done now to start overcoming them. The paper argues that the difficulties of 'getting to zero' must not preclude many steps being taken in that direction. It thus begins by examining steps that nuclear-armed states could take in cooperation with others to move towards a world in which the task of prohibiting nuclear weapons could be realistically envisaged. The remainder of the paper focuses on the more distant prospect of prohibiting nuclear weapons, beginning with the challenge of verifying the transition from low numbers to zero. It moves on to examine how the civilian nuclear industry could be managed in a nuclear-weapons-free world so as to prevent rearmament. The paper then considers what political-security conditions would be required to make a nuclear-weapons ban enforceable and explores how enforcement might work in practice. Finally, it addresses the latent capability to produce nuclear weapons that would inevitably exist after abolition, and asks whether this is a barrier to disarmament, or whether it can be managed to meet the security needs of a world newly free of the bomb. About the Author George Perkovich is a vice president for studies at the Carnegie Endowment for International Peace and director of its non-proliferation programme. He is the author of the award-winning India's Nuclear Bomb (Berkeley, CA: University of California, 2001 edition) and lead author of Universal Compliance (Washington DC: Carnegie Endowment for International Peace, 2005). He has testified on nuclear affairs before the US Senate and House of Representatives and has participated in numerous governmental and non-governmental multinational initiatives to reduce the risk of nuclear war. James M. Acton, a physicist by training, was a lecturer in the Department of War Studies at King's College London until August 2008. Before that he was the science and technology researcher at the Verification Research, Training and Information Centre (VERTIC). His research to date has focused on IAEA safeguards and, while at VERTIC, he participated in the UK-Norway dialogue on verifying nuclear disarmament. He has published in a number of journals and newspapers, including Survival, the Nonproliferation Review and the New York Times.