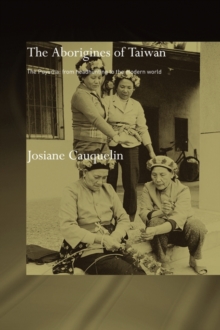 Product description Based on extensive field research over a period of twenty years, this is the first comprehensive study of the Puyuma people of Taiwan. The Puyuma belong to the Austronesian peoples, which today number less than 370,000. In Taiwan, they are the least known of the aboriginal groups, numbering only 6000, and inhabiting the Southeastern province of Taitung. The study looks at the historical changes in the status and definition of these people in relation to the central state, the criteria by which people determine their own ethnic identity, and the evolution of that identity through history. The increasing awareness in the West of the importance of ethnic relations makes this an especially timely book. Review 'The ethnology of the Puyuma presents numerous topics of interest, not only to the researchers, but also to the curious readers. The participant observation by the author gives a particular depth and the richness of the present synthesis.' - China Information About the Author Josiane Cauquelin is a Researcher at the Southeast Asia and Austronesian World Deparment, Centre National de la Recherche Scientifique, France. She is ChargÃ© de Cours at INALCO and Collaboratrice on a Franco-Chinese project on the Zhuang people of China. Her published works include books and articles on the Aborigines of Taiwan and the Buyi and Zhuang of South China.