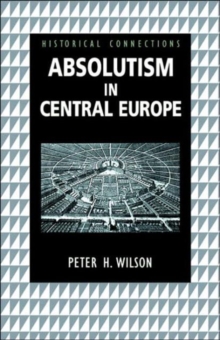 Product description Absolutism in Central Europe is about the form of European monarchy known as absolutism, how it was defined by contemporaries, how it emerged and developed, and how it has been interpreted by historians, political and social scientists. This book investigates how scholars from a variety of disciplines have defined and explained political development across what was formerly known as the 'age of absolutism'. It assesses whether the term still has utility as a tool of analysis and it explores the wider ramifications of the process of state-formation from the experience of central Europe from the early seventeenth century to the start of the nineteenth. Review "In a tightly argued historiographical introduction, Wilson points out that it is an abstraction that has been readily employed by generations of scholars without any serious attempt at definition. He attempts to fill this gap by representing asolutism as a distinct stage in the state-building process, during which monarchs used court display to project an image of power and majesty that mixed hard substance with mere pretension. The author reserves a special niche for the period of "enlightened absolutism," which effectively fortified the region's monarchs from the appeal of the French Revolution. This is a very well written and intelligent essay, once which might, however, challenge the analytical skills of the average university student.." -"C. Ingrao, Purdue University, July 2001