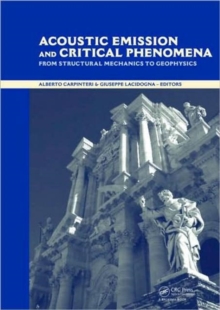 ACOUSTIC EMISSION AND CRITICAL PHENOMENA: FROM STRUCTURAL MECHANICS TO GEOPHYSICS

Product description The Acoustic Emission (AE) technique uses ad hoc transducers to detect AE events caused by crack growth in structures under external loading. This technique is similar to the one employed in earthquake control, where seismic waves reach the monitoring stations placed on the surface of the Earth. And although they take place on different scales, these two phenomena â€“ damage in structural materials and earthquakes in geophysics â€“ are very similar. In both cases a release of elastic energy from sources located inside a medium occurs. Both earthquakes and AE signals can be seen as critical phenomena and follow the Guttenberg-Richter frequency-magnitude relationship under a wide variety of conditions. The number of earthquakes and AE signals scale as a power-law of the area of the rupture zone, where fractal scaling is proposed for the spatial and temporal distributions of earthquakes and AEs. In addition, earthquakes can be taken as an example of the notion of self-organized criticality, since this idea describes the spontaneous organization of the dynamics of a system towards a very particular state, analogous to the critical point found in equilibrium phase transitions. It is also pointed out that brittle failure phenomena, as identified through AE monitoring in concrete, masonry and rocks, can be considered as critical phenomena. This volume includes contributions from internationally recognized experts in the areas of seismicity and acoustic emission, presented at the Post-Conference Workshop on â€œAcoustic Emission and Critical Phenomena: From Structural Mechanics to Geophysicsâ€ (Catania, Italy, 22 June 2007) during the 6th International Conference on Fracture Mechanics of Concrete and Concrete Structures (FraMCoS-6). Acoustic Emission and Critical Phenomena: From Structural Mechanics to Geophysics is divided into two parts: Acoustic Emission and Critical Structural States (Part 1), and Seismic Mechanics and Critical Behaviours (Part 2). The book brings together the state-of-the-art in areas ranging from the mechanics of materials to geophysics, and outlines the potential of the AE technique in terms of practical applications (non-destructive testing and failure evaluation) and theoretical developments (critical phenomena in complex systems). The book will proof to be invaluable to civil and geotechnical engineers, and to researchers working in the areas of mechanics of materials, geophysics, and nondestructive measurements and testing. About the Author Carpinteri\, Alberto; Lacidogna\, Giuseppe