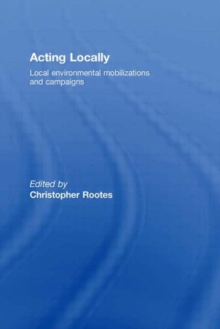 Product Description Local campaigns are the most persistent and ubiquitous forms of environmental contention. National and transnational mobilisations come and go and the attention they receive from mass media ebbs and flows, but local campaigns persist. The persistence or re-emergence of local campaigns is also a reminder that it remain possible to mobilise people around environmental issues, and they have often served as sources of innovation in and re-invigoration of national organisations that have allegedly been co-opted by the powerful and incorporated into the established political and administrative system. But local environmental campaigns have been relatively neglected in the scientific literature. Drawing on examples from Britain, France, Greece, Ireland and Italy, this book seeks to redress that neglect by examining the networks among actors and organisations that connect local mobilizations to the larger environmental movement and political systems, the ways in which local disputes are framed in order to connect with national and global issues, and the persistent impacts of the peculiarities of place upon environmental campaigns. This book was previously published as a special issue of Environmental Politics Review 'This is a very interesting volume that will be useful to researchers and students of social movements, particularly environmental mobilizations and campaigns.' -Â Social Movement Studies, Vol. 9, No. 1, 92, January 2010