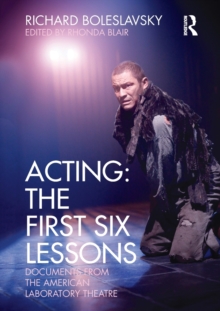 Product Description Acting: The First Six Lessons was first published in 1933 and remains a key text for anyone studying acting today. These dramatic dialogues between teacher and idealistic student explore the field of acting according to one of the original teachers of Stanislavskyâ€™s System in America. This new edition of an essential text is edited by Rhonda Blair and supplemented for the very first time with documents from the American Laboratory Theatre. These collect together a broad range of exciting unpublished material, drawn from Boleslavskyâ€™s pivotal and unprecedented teachings on acting at the American Laboratory Theatre. Included are: "The Creative Theatre Lectures" by Richard Boleslavsky Boleslavskyâ€™s "Lectures from the American Laboratory Theatre" "Acting with Maria Ouspenskaya," four short essays on the work of Ouspenskaya, Boleslavskyâ€™s colleague and fellow actor trainer A new critical introduction and bibliography by the Editor. About the Author Richard Boleslavsky (1889â€“1937) (born Ryszard Boleslawski) was a Polish actor and director. He was a member of the Moscow Art Theatre and director of its First Studio. He emigrated to New York in the 1920s and was the first teacher of the Stanislavski system of acting in the West. He went on to produce plays on Broadway and was a leading Hollywood director in the 1930s. Rhonda Blair is Professor of Theatre at Southern Methodist University. She is a leading voice on the applications of cognitive science on the acting process and the author of The Actor, Image, and Action: Acting and Cognitive Neuroscience. She is currently the President of the American Society of Theatre Research (ASTR).