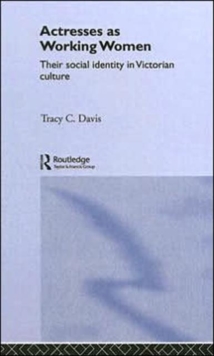 ACTRESSES AS WORKING WOMEN: THEIR SOCIAL IDENTITY IN VICTORIAN CULTURE (GENDER IN PERFORMANCE)

Product Description Using historical evidence as well as personal accounts, Tracy C. Davis examines the reality of conditions for `ordinary' actresses, their working environments, employment patterns and the reasons why acting continued to be such a popular, though insecure, profession. Firmly grounded in Marxist and feminist theory she looks at representations of women on stage, and the meanings associated with and generated by them. Review `What is most impressive in Davis's study is the broad spectrum of her research. It includes not only the famous names from the era, but the working women of low rank who entered the profession as a means of securing social independence in an age when women belonged to men.' - New Statesman & Society `This book transforms nineteenth century theatre studies. Tracy Davis brings feminist scholarship and perspectives tellingly to bear on her investigation of the meanings and practices of the world of actresses in the nineteenth century.' - Theatre Research International `Its a sophisticated scholarship (there are over 450 footnotes) championing a neglected rarity of 19th-century cultural history: women as legitimate autonomous professionals' - City Limits `It is fascinating and important that someone has at last tackled the topic of women performers as workers, and Tracy Davis is particularly insightful about the ways their image was sexualised by society.' - Morning Star About the Author Tracy C. Davis is Lecturer in the Department of English at Northwestern University.