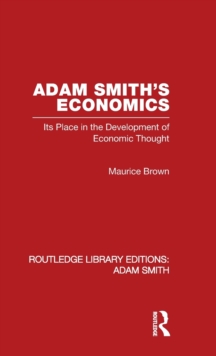 ADAM SMITH'S ECONOMICS: ITS PLACE IN THE DEVELOPMENT OF ECONOMIC THOUGHT

The conventional received opinion of Adam Smith as an isolated figure, the founder of â€˜modernâ€™ economics, is thoroughly mistaken and misleading. This is the central premise of this book, first published in 1988,Â in which the author argues that by placing Smithâ€™s work in its historical context, we discover profound continuities between Smithâ€™s work and that of his predecessors, and his contemporaries. The effect is to re-orientate our perception of Smith and his achievement. No longer the single-handed champion of free markets and competition whose work revolutionised and completely redirected economics. He appears instead as a brilliant contributor to a deep-rooted contemporary debate, someone who can be placed in a line of thinkers that stretches between Machiavelli and Kant.