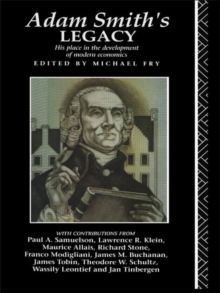 ADAM SMITH'S LEGACY: HIS PLACE IN THE DEVELOPMENT OF MODERN ECONOMICS

Product Description First published in 1992. Routledge is an imprint of Taylor & Francis, an informa company. From the Back Cover Although Adam Smith died over two hundred years ago, his influence is still felt in many areas of contemporary economics. In this volume some of the world's leading economists pay tribute to Smith's continuing importance. The contributors write under three different headings. The first section considers The Wealth of Nations from today's perpective. Even though Smith lacked the sophisticated mathematical techniques of modern economists his theoretical and quantitative work is shown to be both acute and rigorous. The second section looks at modern applications of Smith's analysis. Again, the terms Smith uses when addressing issues in macro and labour economics might not be familiar, but the essentials of his analysis will be. Finally, the book considers the state of modern economics. Heirs to Smith as leaders of the discipline, the contributors assess the extent to which economics measures up to the bench-mark established by its founder. Both a tribute to the enduring value of Smith's work and an overview of the current state of the discipline, this volume will be of interest to the whole economics community. About the Author Michael Fry was the Organizing Secretary of the Adam Smith Bicentenary Committee in 1990. He is an independent writer and broadcaster, and the author of numerous books, including Patronage and Principle: A Political History of Modern Scotland and The Dundas Despotism.