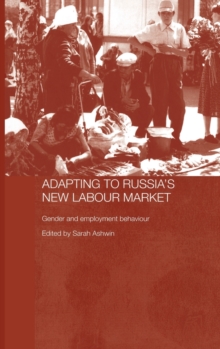 Product Description Economic reform in post-Soviet Russia created not only a devastating decline in living standards, but also widespread insecurity and uncertainty. This book is the first to analyse the situation from a gendered perspective, shedding new light on the way in which Russians are coping with the transformation of the labour market. The book examines gender differences in responses to economic reform, and considers the implications of these for the labour market outcomes and wider well-being of men and women during transition. Based on original research carried out by an experienced team of sociologists, the book analyses the journeys of 240 men and women through the turbulent Russian labour market of 1999-2001. It includes chapters on: *the way gender norms inherited from the Soviet era have influenced responses to transition *sex segregation and discrimination in the labour market *gender differences in work orientations and behaviour *who benefits from networks *which life events are most likely to initiate downward economic trajectories. Review 'Sarah Ashwin and her team of Russian sociologists have done it again, brought together their years of research into the gender fall out of the Soviet collapse, exploring survival strategies in the face of an unprecedented economic collapse -- how and when women have proven to be more flexible and resilient than men, how men have held on to better paid employment, but when they fail, how they have often subsided into a quagmire of demoralisation. Here we have the perfect combination of surveys and case material, sensitive to general trends but also to the complex human response to adversity. Essential reading for all those who want to get beyond distorting stereotypes and sensational depictions of Russian life today.' - Michael Burawoy, University of California, Berkeley 'Provides very interesting analyses of the ways individuals are dealing with the deep problems during the restructuring of the Russian labour market, and the gender differences in relation to individual strategies. Itâ€™s an excellent book which will provide students, researchers and policy makers in social sciences with a new insight into the contradictions and problems of actual development in Russia.' - Birgit Pfau-Effinger, University of Hamburg About the Author Sarah Ashwin is a reader in the Industrial Relations Department at the London School of Economics and Political Science. She has been doing field research in Russia since 1991. Her main areas of interest are workers' organization, trade unions, and gender relations. Her publications include Gender, State and Society in Soviet and Post-Soviet Russia (Routledge, 2000).