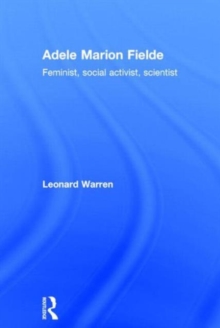 Product description Adele Marion Fielde, born in 1839, was a teacher, an evangelist, a social activist, scientist, lexicographer, writer and lecturer. As an American missionary in China, she became a local teacher and evangelist, struggling to reconcile her Baptist upbringing with her restless intellect. As an energetic social activist, she was a major figure in the suffragist movement, the abolition of the slave trade and the founding of two hospitals. As a scientist she conducted seminal research which is still discussed and studied today. This book provides an in-depth biographical study of the life of this remarkable woman, exploring her impact on her contemporary society, and her abiding influence on the scientific and academic communities to the present day. The author examines the social and religious constraints on Fielde's life and work and discusses her efforts to transcend these through the construction of a personal system of belief which emphasized the importance of helping others. He demonstrates how, as a woman of immense energy and intellectual ability, she was able to influence the scientific and political communities despite their prevailing negative attitude towards women. Adele Marion Fielde will be of vital interest to scholars concerned with the study of gender and the history of science. About the Author Leonard Warren was born in Toronto, and received his BA and MD degrees at the University of Toronto. After an Internship at the Toronto General Hospital, he earned a PhD degree in biochemistry at MIT in Cambridge MA. He did research at the National Institute of Health, the University of Pennsylvania, and the Wistar Institute in Philidelphia, with Sabbatical years at the Pasteur Institute (Paris), and the Imperial Cancer Research Fund (London). Recently, he had published a biography Joseph Leidy, the Last Man Who Knew Everything. He has completed a biography of Constantine Samuel Rafinesque, and is presently writing the life of William Maclure, philanthropist, education, and 'father of American Geology'.