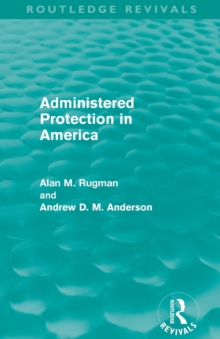 First published in 1987, Administered Protection in America follows calls in the United States, at that time, for the protection of American industries and the preservation of jobs threatened by foreign competition. Professor Rugmanâ€™s and Dr Andersonâ€™s work presents evidence that the United States already has a system of administered protection in place in the form of escape clauses, countervailing duty and anti-dumping procedures. The book argues that the application of these procedures by a largely decentralised administration has reduced United States state policy to a state of near anarchy. Rugman and Anderson argue that this is counterproductive for the United States and extremely harmful for Americaâ€™s trading partners in Europe, Canada and the Far East. The conclusion looks at discussions of trade negotiations with Canada, which Canada was pursuing for a bilateral free trade agreement with the United States.