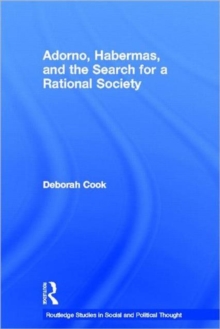 ADORNO, HABERMAS AND THE SEARCH FOR A RATIONAL SOCIETY (ROUTLEDGE STUDIES IN SOCIAL AND POLITICAL THOUGHT)

Product Description Theodor W. Adorno and Jnrgen Habermas both champion the goal of a rational society. However, they differ significantly about what this society should look like and how best to achieve it. Exploring the premises shared by both critical theorists, along with their profound disagreements about social conditions today, this book defends Adorno against Habermas' influential criticisms of his account of Western society and prospects for achieving reasonable conditions of human life. The book begins with an overview of these critical theories of Western society. Both Adorno and Habermas follow Georg Lukacs when they argue that domination consists in the reifying extension of a calculating, rationalizing form of thought to all areas of human life. Their views about reification are discussed in the second chapter. In chapter three the author explores their conflicting accounts of the historical emergence and development of the type of rationality now prevalent in the West. Since Adorno and Habermas claim to have a critical purchase on reified social life, the critical leverage of their theories is assessed in chapter four. The final chapter deals with their opposing views about what a rational society would look like, as well as their claims about the prospects for establishing such a society. Adorno, Habermas and the Search for a Rational Society will be essential reading for students and researchers of critical theory, political theory and the work of Adorno and Habermas. About the Author Deborah Cook is Professor of Philosophy at the University of Windsor, Canada.