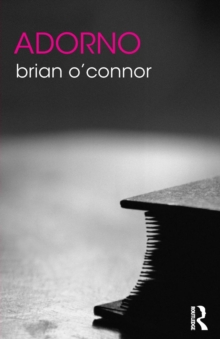 Product Description Theodor W. Adorno (1903-69) was one of the foremost philosophers and social theorists of the post-war period. Crucial to the development of Critical Theory, his highly original and distinctive but often difficult writings not only advance questions of fundamental philosophical significance, but provide deep-reaching analyses of literature, art, music sociology and political theory. In this comprehensive introduction, Brian Oâ€™Connor explains Adornoâ€™s philosophy for those coming to his work for the first time, through original new lines of interpretation. Beginning with an overview of Adornoâ€™s life and key philosophical views and influences, which contextualizes the intellectual environment in which he worked, Oâ€™Connor assesses the central elements of Adornoâ€™s philosophy. He carefully examines Adornoâ€™s distinctive style of analysis and shows how much of his work is a critical response to the various forms of identity thinking that have underpinned the destructive forces of modernity. He goes on to discuss the main areas of Adornoâ€™s philosophy: social theory, the philosophy of experience, metaphysics, morality and aesthetics; setting out detailed accounts of Adornoâ€™s notions of the dialectic of Enlightenment, reification, totality, mediation, identity, nonidentity, experience, negative dialectics, immanence, freedom, autonomy, imitation and autonomy in art. The final chapter considers Adornoâ€™s philosophical legacy and importance today. Including a chronology, glossary, chapter summaries, and suggestions for further reading, Adorno is an ideal introduction to this demanding but important thinker, and essential reading for students of philosophy, literature, sociology and cultural studies. Review 'Introductions such as Brian O'Connor's Adorno are a genre in their own right with their proper demands. ... O'Connor's style is careful, mercifully jargon-free, and nicely suited to the genre. He is not seduced into emulating Adorno's scintillating style, and he handles Adorno's abstruse concepts with insight and dexterity.' - James Gordon Finlayson, Notre Dame Philosophical Reviews 'Oâ€™Connorâ€™s book stands out as an exceptionally lucid and reliable introduction to a notoriously difficult thinker. I can think of no study of this kind that so elegantly and effectively explores Adornoâ€™s thought and its relevance to our own time.' - Espen Hammer, Temple University, USA 'This long-awaited introduction is an ideal starting point for anyone interested in Adornoâ€™s rich and challenging work. Oâ€™Connor succeeds in combining accessibility with philosophical sophistication and interpretative nuance. He unlocks major difficulties with which Adornoâ€™s writings presents us and demonstrates the enduring importance of non-identity thinking.' - Fabian Freyenhagen, University of Essex, UK "This is unquestionably the best introduction to Adorno available, and should be recommended to anyone hoping to familiarize themselves with this difficult and rewarding philosopher." -Owen Hulatt, Unversity of York, UK "This book is a most welcome addition to the Routledge Philosophers series. Brian Oâ€™Connorâ€™s slim volume is perhaps the most concise yet wide-ranging of all introductions to Theodor W. Adornoâ€™s (1903â€“1969) thought currently in print today. Oâ€™Connorâ€™s text deserves a spot on the shelf of anyone who is interested in the Frankfurt School in general or Adorno in particular. Those who are interested in learning more about the philosopher by the name of Adorno would be wise to pick this book up." -Patrick Gamsby, Brandeis University, USA "...this new introduction is lucid and gripping...In particular, it is excellent in bringing out the significance of Adorno's criticisms of identity-thinking, which are too often dismissed as obscure." -Koshka Duff in Marx & Philosophy Review of Books About the Author Brian Oâ€™Connor is Associate Professor of Philosophy at University College Dublin, Ireland. He is the author of Adornoâ€™s Negative