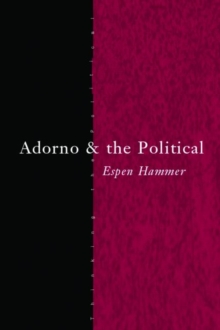 Product Description Interest in Theodor W. Adorno continues to grow in the English-speaking world as the significance of his contribution to philosophy, social and cultural theory, as well as aesthetics is increasingly recognized. Espen Hammerâ€™s lucid book is the first to properly analyze the political implications of his work, paying careful attention to Adornoâ€™s work on key thinkers such as Kant, Hegel and Benjamin. Examining Adornoâ€™s political experiences and assessing his engagement with Marxist as well as liberal theory, Hammer looks at the development of Adornoâ€™s thought as he confronts Fascism and modern mass culture. He then analyzes the political dimension of his philosophical and aesthetic theorizing. By addressing JÃ¼rgen Habermasâ€™s influential criticisms, he defends Adorno as a theorist of autonomy, responsibility and democratic plurality. He also discusses Adornoâ€™s relevance to feminist and ecological thinking. As opposed to those who see Adorno as someone who relinquished the political, Hammerâ€™s account shows his reflections to be, on the most fundamental level, politically motivated and deeply engaged. This invigorating exploration of a major political thinker is a useful introduction to his thought as a whole, and will be of interest to scholars and students in the fields of philosophy, sociology, politics and aesthetics. Review Hammer's contribution should dispel any rumours that [Adorno's] work is simply apolitical.' - Graduate Faculty Philosophy Journal 'Hammer is to be congratulated for presenting a lucid and consistentÂ case for the significance of Adorno's political thought, doing justiceÂ to its complexity while situating it within its specific historical context.' -Â Howard Caygill, University of London, UK