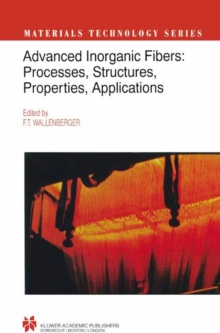 F. T. Wallenberger This book serves as an introduction to advanced inorganic fibers and aims to support fundamental research, assist applied scientists and designers in industry, and facilitate materials science instruction in universities and colleges. Its three main sections deal with fibers which are derived from the vapor phase such as single crystal silicon whiskers or carbon nanotubes, from the liquid phase such as advanced glass and single crystal oxide fibers, and from solid precursor fibers such as carbon and ceramic fibers. Contents FIBERS FROM THE VAPOR, LIQUID AND SOLID PHASE 1.1 The most important phase isthe liquid phase 1.2 Afiber by any name isstill afiber 1.3 Biographic sketches ofthe authors 1.4 Acknowledgments CHAPTER 1 FIBERS FROM THE VAPOR, LIQUID AND SOLID PHASE F. T. Wallenberger The book describes advanced inorganic fibers, focuses on principles and concepts, analyzes experimental and commercial processes, and relates process variables to structures, structures tofiber properties and fiber properties to end-use performance. In principle, there are discontinuous or inherently short, and continuous or potentially endless, fibers. Short fibers range from asbestos fibers, which were described as early as 300 BC to carbon nanotubes which were discovered in 1991 [1] and have been fully described in 1999 [2].