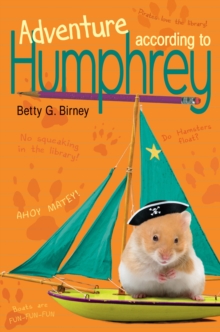 ADVENTURE ACCORDING TO HUMPHREY

Product Description Humphrey is in for his biggest adventure yet! When his friends begin studying the ocean and sailing, he not only discovers the new and exciting world of the library, but also stows away aboard a model boat and takes a very perilous sail on Potter?s Pond. Even with all this excitement, he fi nds time to smooth rough waters between Gail and her free-spirited mom, help competitive Kirk see that winning isn?t everything, and investigate whether his pal Aldo is really planning to become a pirate and sail the high seas. Kids in seven states voted The World According to Humphrey the winner of their children?s choice awards and consistently rave about Humphrey. About the Author Betty G. Birney has won many awards for writing for television, including an Emmy, three Humanitas Prizes, and a Writers Guild of America Award, and she won the Christopher Award forÂ Friendship According to Humphrey. In addition to the Humphrey series, she is the author ofÂ The Seven Wonders of Sassafrass SpringsÂ andÂ The Princess and the Peabody's. She grew up in St. Louis, Missouri, where her parents grew up as neighbors on Humphrey Street. Her website, bettybirney.com, is full of fun Humphrey activities and information.