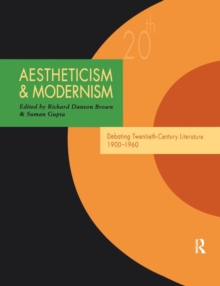 This textbook ranges from the early twentieth-century to the full array of modernisms emerging between the First and Second World Wars. The editors introduce twentieth-century debates around genre, form and content reflected in both literary and critical writing of the period, as well as differing accounts of the function of literature (aestheticist vs. didactic). They go on to examine debates around modernisms, and the various ways in which authors negotiated the departure of the modern from the past in terms of style, form, ideas and ideology. This wide-ranging volume is not only ideal as the first part of a course on twentieth-century literature, but also as a companion to courses on modernist literature and culture. Texts examined in detail include: Chekhov's The Cherry Orchard, Mansfield's Short Stories, poetry of the 1930s, Gibbon's Sunset Song, Eliot's Prufrock, Brecht's Galileo, Woolf's Orlando, Okigbo's Selected Poems.