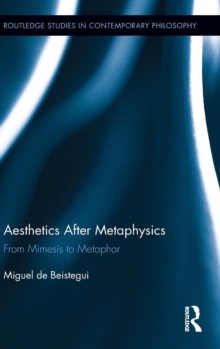 AESTHETICS AFTER METAPHYSICS: FROM MIMESIS TO METAPHOR (ROUTLEDGE STUDIES IN CONTEMPORARY PHILOSOPHY)

Product description This book focuses on a dimension of art which the philosophical tradition (from Plato to Hegel and even Adorno) has consistently overlooked, such was its commitment â€“ explicit or implicit â€“ to mimesis and the metaphysics of truth it presupposes. De Beistegui refers to this dimension, which unfolds outside the space that stretches between the sensible and the supersensible â€“ the space of metaphysics itself â€“ as the hypersensible and show how the operation of art to which it corresponds is best described as metaphorical. The movement of the book, then, is from the classical or metaphysical aesthetics of mimesis (Part One) to the aesthetics of the hypersensible and metaphor (Part Two). Against much of the history of aesthetics and the metaphysical discourse on art, he argues that the philosophical value of art doesnâ€™t consist in its ability to bridge the space between the sensible and the supersensible, or the image and the Idea, and reveal the sensible as proto-conceptual, but to open up a different sense of the sensible. His aim, then, is to shift the place and role that philosophy attributes to art. Review "This is a rich, thoughtful, and provocative book. It is at once learned and philosophically ambitious, presenting and defending a post-metaphysical aesthetic that aims to refigure our relation to the earth. A great deal is at stake in these discussions, much more than what we might term a â€˜contribution to contemporary debates.â€™ The true stakes of this work are no less than the basic, even originary character of human dwelling." John Lysaker, Emory University, USA About the Author Miguel de Beistegui is Professor of Philosophy at the University of Warwick, UK.