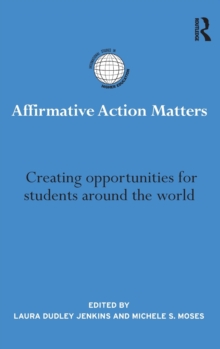 Product description Affirmative Action Matters focuses specifically on affirmative action policies in higher education admissions, the sphere that has been the most controversial in many of the nations that have such policies. It brings together distinguished scholars from diverse nations to examine and discuss the historical, political and philosophical contexts of affirmative action and clarify policy developments to further the meaningful equality of educational opportunity. This unique volume includes both well established and emerging policies from the Americas, Europe, Africa, and Asia, policies which developed under a variety of political systems and target a range of underrepresented groups, based on race, ethnicity, gender, class, social background, or region. Accessible and thought provoking case studies of affirmative action demonstrate that such policies are expanding to different countries and target populations. While some countries, such as India, have affirmative action policies that predate those in the United States, affirmative action is a recent development in countries such as Brazil and France. Legal or political pressures to move away from explicitly race-based policies in several countries have complicated affirmative action and make this assessment of international alternatives particularly timely. New or newly modified policies target a variety of disadvantaged groups, based on geography, class, or caste, in addition to race or sex. International scholars in six countries spanning five continents offer insights into their own countriesâ€™ experiences to examine the implications of policy shifts from race toward other categories of disadvantage, to consider best practices in student admission policies, and to assess the future of affirmative action. About the Author Laura Dudley Jenkins is Associate Professor of Political Science at the University of Cincinnati. Her research and publications focus on social justice policies in the context of culturally diverse democracies, especially India. Jenkins' book Identity and Identification in India: Defining the Disadvantaged (Routledge, 2003, 2009) examines competing demands for affirmative action on the basis of caste, religion, class and gender and the ways the government identifies various categories through the courts, census and official certificates. She was a Fulbright New Century Scholar in South Africa and India. Michele S. Moses is Professor of Educational Foundations, Policy and Practice at the University of Colorado Boulder. She is a philosopher of education who is centrally concerned with education policy studies, especially as related to race, ethnicity, and equality of educational opportunity. Her current research is aimed at gaining a deeper understanding of the moral roots of the political debates over race-conscious policies that profoundly affect meaningful opportunities for higher education. Dr. Moses is the author of Embracing Race: Why We Need Race-Conscious Education Policy (Teachers College Press, 2002) and was a Fulbright Specialist and New Century Scholar in Brazil.