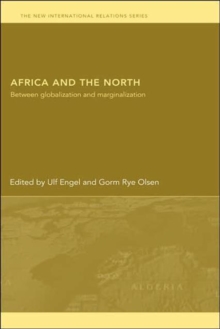 AFRICA AND THE NORTH: BETWEEN GLOBALIZATION AND MARGINALIZATION (NEW INTERNATIONAL RELATIONS)

Product Description An important new discussion of Africa's place in the international system. This volume discusses Africa's place in the international system, examining the way in which the Westphalian system, in light of the impact of globalization and transnational networks, continues to play a major role in the structuring of Africa's international relations.The book provides a solid empirical analysis of key global players in Africa - France, the UK, the US, Japan, Germany, the EU and the UN - and of their policies towards the region. In the context of the 'war against terrorism', African political stability becomes a consideration of increasing importance. By analyzing the relevance of the states in the North, this book challenges conventional wisdom in recent international relations thinking. It applies the concept of an 'international policy community' to bridge the gap between the 'domestic' and the 'international', explaining why Africa retains a role in global politics out of any proportion to its economic weight. Review 'Africa and the North offers a concise, empirically rich and clearly written overview of some of the key apects of Northern involvement with the continent. The editors have done very well to hold each cahpter author to a single remit, giving the book a coherence that some edited volumes fail to achieve. It would be very useful for any student of Africa's internationalÂ politics.'Graham Harrison, Sheffield University, UK About the Author Ulf Engel is associate professor of African politics at the Institute of African Studies, University of Leipzig. His research interests focus on Africa's role in international relations ans the dynamics beyond the Westphalian state system. Dr. Olsen received her doctoral degree in History from the University of Oslo in 2005 and has worked within the field of New Cold War History since 1993. Her main research interests include Soviet foreign policy towards Vietnam and China and the role of ideology in foreign policy. Dr. Olsen now works in the Norwegian Ministry of Defence.