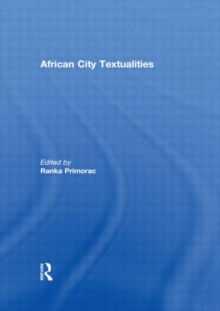 Product Description The stereotype of Africa as a predominantlyÂ 'natural' space ignores the existence of vibrant and cosmopolitan urban environments on the continent. Far from merely embodying backwardness and lack, African cities are sites of complex and diverse cultural productions which participate in modernity and its dynamics of global flows and exchanges. This volume merges the concerns of urban, literary and cultural studies by focusing on the flows and exchanges of texts and textual elements. By analysing how texts such as popular and canonical fiction, popular music, self-help pamphlets, graffiti, films, journalistic writing, rumours and urban legends engage with the problems of citizenship, self-organisation and survival, the collection shows that despite all the problems of Africa, its cities continue to engender forward-looking creativity and hope. The texts collected here belong to several different genres themselves, and they are authored by both distinguished and younger scholars, based in and outside of Africa. The volume explores the textualities emerging from the cities of Senegal, Nigeria, Ghana, Uganda, Kenya, Zambia, Zimbabwe and South Africa. Above all, it calls for an end to disabling hierarchical categorisations of both texts and cities. This book was published as a special issue of the Journal of Postcolonial Writing. About the Author Ranka PrimoracÂ is a Teaching Fellow at the University of Southampton. Previously, she has taught Africa-related courses in several institutions of higher learning, including Cambridge and the London branch of New York University, and has authored The Place of Tears: The Novel and Politics in Modern Zimbabwe (2006) and co-edited Zimbabwe in Crisis: The International Response and the Space of Silence (2007).