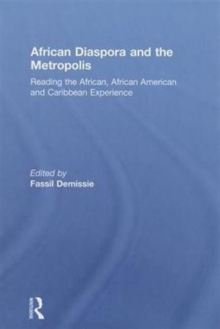 AFRICAN DIASPORA AND THE METROPOLIS: READING THE AFRICAN, AFRICAN AMERICAN AND CARIBBEAN EXPERIENCE

Product Description At the end of the 19th and at the beginning of the 20th century, a number of African American and Caribbean intellectuals and immigrants of the African Diaspora with all their apprehensions set out in steamships en route and carried with them a certain presence to the metropoleis of Europe and North America. These individuals traversed the "middle passage" in the opposite direction from the forced journey undertaken by their enslaved ancestors. Later they began to arrive in large numbers as free men and women in London, Paris, Berlin, Madrid, Brussels, Lisbon, New York, and other places in the metropolis by steam ships and later by planes, and were actors in the larger history of empire from which the imperatives of forced migration, uprooting, displacement, and exile had arisen. The texts selected offer critical examination of a broad range of African Diaspora experiences in the metropole drawn from Senegal, the Caribbean, United States, Britain, Nigeria and France. Bringing together comparative and diasporic perspectives, the book explores the complex roles that race, gender, sexuality and history have played in the formation of African Diaspora identities in the metropole since the 19th century. This book was published as a special issue of African and Black Diaspora: An International Journal. About the Author Fassil Demissie is Associate Professor at the Department of Public Policy, DePaul University. He has previously edited Postcolonial African Cities and has served as co-editor of African and Black Diaspora: An International Journal, bothÂ published byÂ Routledge. He co-edited The Black Body, Imagining, Writing and (Re)Reading (University of South Africa Press). His new current project is Colonial Architecture and Urbanism in Africa: Intertwined and Contested Histories (forthcoming, Ashgate).