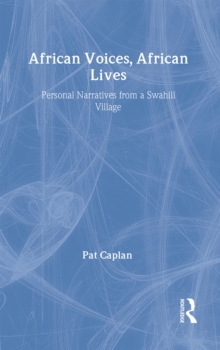 Product Description African Voices, African Lives explores the world of 'Mohammed', a swahili peasant living on Mafia Island, Tanzania. Through his own words - some written, some spoken - and those of his relatives, including his ex-wife and one of his daughters, he enables us to see the world through his eyes, including the invisisble world of spirits which plays a significant role in his life. This information is gathered by Pat Caplan, the anthropologist, over almost three decades of talking and writing to each other. She acts not only as translator and editor, but also as interpreter, bringing in her own knowledge gathered from field data as well as comparative material from other anthropological work. By utilising a mixture of styles - narrative and life history, ethnographic observation, and the diary kept by Mohammed at the anthropologist's bequest, African Voices African Lives will make an important contribution to current debates in anthropology by grappling with issues raised by 'personal narratives', authorial authority, and with refexivity. Review 'A worthy book, an experiment in style which contains some insights into a man's character and into the difficulties of life in 1990's Tanzania.' - Maia Green, Oral History About the Author Pat Caplan is Professor of Anthropology at Goldsmith's College, University of London, and is author of Gendered Fields (1993).